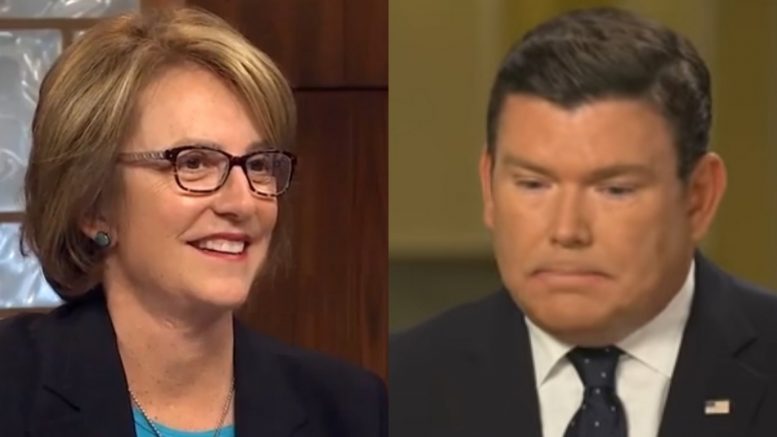 Arizona state senator Wendy Rogers intensified her attack on Fox News host Bret Baier in regards to his coverage of the Maricopa County foresice audit, as she publicly presented him with a ‘Fake News award’.

The Fox anchor apparently blocked the Sen. Rogers after she called him out in a recent tweet. In reaction, the Arizona senator couldn’t help making humor out of the situation. ** Update! Baier unblocks Sen. Wendy Rogers…See Below!

Related Article: AZ State Sen. Wendy Rogers: ‘We Have to Eject Fraud Machines’ – ‘We Need to Run’ Bret Baier ‘Out of the Republic’

“Congratulations to @BretBaier at @FoxNews for receiving the very first #FakeNews award from me for his bungling of the Arizona call on Nov 3rd for President and for lying and discrediting our very credible audit,” Sen. Rogers tweeted.

“Bonus points for blocking me after I called him out,” she added along with #Triggered.

Congratulations to @BretBaier at @FoxNews for receiving the very first #FakeNews award from me for his bungling of the Arizona call on Nov 3rd for President and for lying and discrediting our very credible audit. Bonus points for blocking me after I called him out. #Triggered pic.twitter.com/VZSfzw1tMb

.@marthamaccallum @HARRISFAULKNER @SpecialReport please let Bret know about this honor. I have waited all year to award this and he earned it. https://t.co/WVXJvI2oA3

Last weekend, Sen. Rogers suggested Baier should be ‘run out’ from ‘the Republic’ after the Fox anchor downplayed the Maricopa County audit, and later denied lying to his audience after being called out on Twitter.

I want my country back. We have to eject the fraud machines and we need to conduct forensic audits everywhere. They have been doing this to us a lot longer than we realize. By the way, what is up with @BretBaier lying through his teeth. We need to run him out of the Republic. 🇺🇸

I did not say that Susan. Please review the tape. I said the investigation continues and so far officially only roughly 200 ballots have been thrown out. I said what the county says and what critics are saying. Go watch again. https://t.co/Rwh85us6Gp

According to Sen. Rogers, Bret Baier unblocked her account after being presented with the ‘Fake News award.’

BREAKING: @BretBaier has unblocked me after I awarded him a #FakeNews award. pic.twitter.com/zv2Suwfyu9