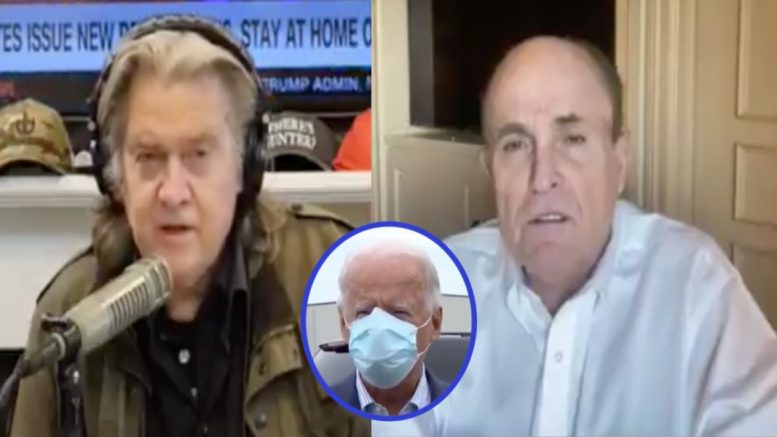 President Donald Trump’s attorney, Rudy Giuliani, spoke with Steve Bannon on “War Room” Friday, and told the former White House chief strategist that he would volunteer to be special prosecutor to to bring an indictment against the Biden family.

Bannon presented the question to the former New York City mayor: “You’re saying right now, you volunteer to be special prosecutor? And if you’re appointed special prosecutor before the 20th of January, noon on the 20th, in front of a grand jury, you’re confident you could bring an indictment about their compromise by the Chinese Communist Party taking money from the CCP? That’s what you’re saying?”

“Yes, sir,” Rudy Giuliani responded. “And I’m quite confident I could bring the Ukraine case. That one, I have 22 witnesses, and I have tape recordings.”

Steve Bannon then told President Trump’s attorney, “This is why people love you, mayor. They understand that you’re a honey badger, you’re relentless. You don’t care how they mock you, how you’re ridiculed.”

“I have you tell you, I’m very sad about this. This isn’t something that I’m happy about,” Giuliani admitted. “To see something like this happening to the presidency of the United States, gets you close to wanting to cry. I mean, I never thought I’d see the day when somebody like this would be stepping into the White House where I would possess in my records the evidence that shows that he’s been a career criminal.” Video Below

On Friday, the Commander the Chief took to Twitter, slamming Democrats for the “impeachment hoax”, indicating he was impeached by House Democrats for Biden’s “corruption”. Trump was ultimately acquitted by the Senate.

The New York Post published emails in October, alleging that Hunter Biden introduced his father, Joe Biden, to a top executive at Ukrainian natural gas firm Burisma Holdings in 2015– one year before his father reportedly pressured the country’s government to fire a prosecutor who had launched an investigation into the company.

One of the people on an explosive email thread allegedly involving Hunter Biden has also corroborated the veracity of the messages, which appear to outline a payout for former Vice President Joe Biden as part of a deal with a Chinese energy firm, Fox News reported. Video Below

One email, dated May 13, 2017, includes a discussion of “remuneration packages” for six people in a business deal with a Chinese energy firm. The email appeared to identify Hunter Biden as “Chair/ Vice Chair depending on agreement with CEFC,” in an apparent reference to now-bankrupt CEFC China Energy Co.

The email includes a note that “Hunter has some office expectations he will elaborate.” A proposed equity split references “20” for “H” and “10 held by H for the big guy?” The “the big guy” is a reference to the former vice president.