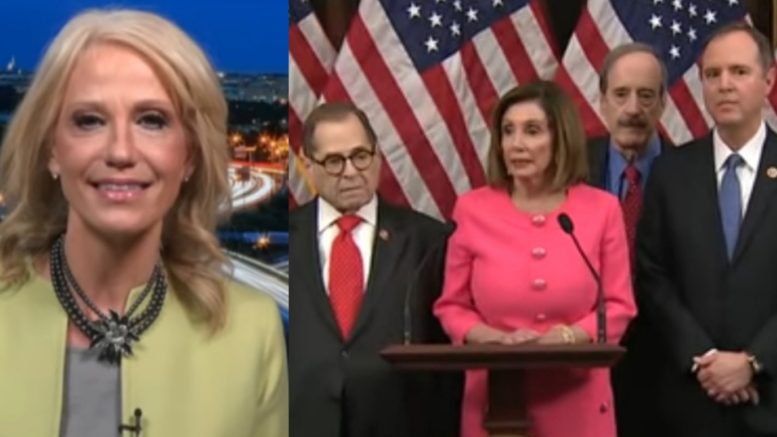 On Saturday, Kellanne Conway explained how impeachment will historically have no bearing on President Trump’s legacy as it will be eclipsed by the tremendous economic boom that America has enjoyed since the beeginning of his presidency.

Kellyanne’s remarks came in wake of President Trump signing phase one of the China trade deal on the same day that Nancy Pelosi signed off on two articles of impeachment against him.

Related Article: Pam Bondi On Dems Case Against The President: “They Have Sent Over The Flimsiest Of Flimsy Evidence”

“Let’s go back just a few months,” Kellyanne said. “We were promised bribery, extortion, quid pro quo, high crimes and misdemeanors. And there’s nothing here that even approaches that. In fact, those words are not even in those articles of impeachment.”

She continued, “I think that when people look back at the beginning of January 2020, they’re going to only think about the economic boom time. These two major trade deals in two days, a DOW Jones that exploded past 29,000 and will keep on going forward.” Video Below

Then after bringing up the wage boost that millions of American workers have seen, Kellyanne said, “This is a blue-collar boom in the Trump economy and people think about things in very large swathes. They won’t think about the impeachment.”

“Nancy Pelosi says ‘impeached forever’. She’s going to have to answer for why they got so little done as Democrats,” she asserted.

Moments later, Kellyanne declared, “I think history will not look kindly on the instigators and the investigators of this period. And will reward those, beginning with President Trump, who actually showed courage and boldness in transforming our economy and our relationship with the world’s second largest ecomony, China.” Video Below