45th President Donald J. Trump issued a statement via email from his “Save America” PAC Thursday, following the Arizona Senate hearing over the forensic audit in Maricopa County on the 2020 November general election.

Trump called the hearing “devastating news to the Radical Left Democrats and the Biden Administration” as much was revealed regarding mail-in ballots, voter rolls, the voting system being breached, and subpoenaed items still missing/not handed over.

“While this, according to the Senate, is preliminary, with results being announced at a later date, it seems that 74,243 Mail-In Ballots were counted with ‘no clear record of them being sent.’ There were 18,000 voters who were scrubbed from the voter rolls AFTER the election,” Trump wrote.

“They also revealed that the voting system was breached or hacked (by who?). Very big printer and ballot problems with different paper used, etc., and MUCH MORE,” the 45th President pointed out.

“The irregularities revealed at the hearing today amount to hundreds of thousands of votes or, many times what is necessary for us to have won. Despite these massive numbers, this is the State that Fox News called early for a Biden victory. There was no victory here, or in any other of the Swing States either,” he said. Continued Below

(Related: AZ Audit Contractor: “An Element of the Election System Was Actually Breached During the Course of the November 2020 Election”)

“Maricopa County refuses to work together with the Senate and others who are merely looking for honesty, integrity, and transparency. Why do the Commissioners not want to look into this corrupted election? What are they trying to hide?” he wondered.

“The highly respected State Senator Wendy Rogers said in a tweet the hearing today means we must decertify the election. In any event, the Senate patriots are moving forward with final results to be announced in the not-too-distant future, but based on today’s hearing, why even wait?” Trump asked. Video Below 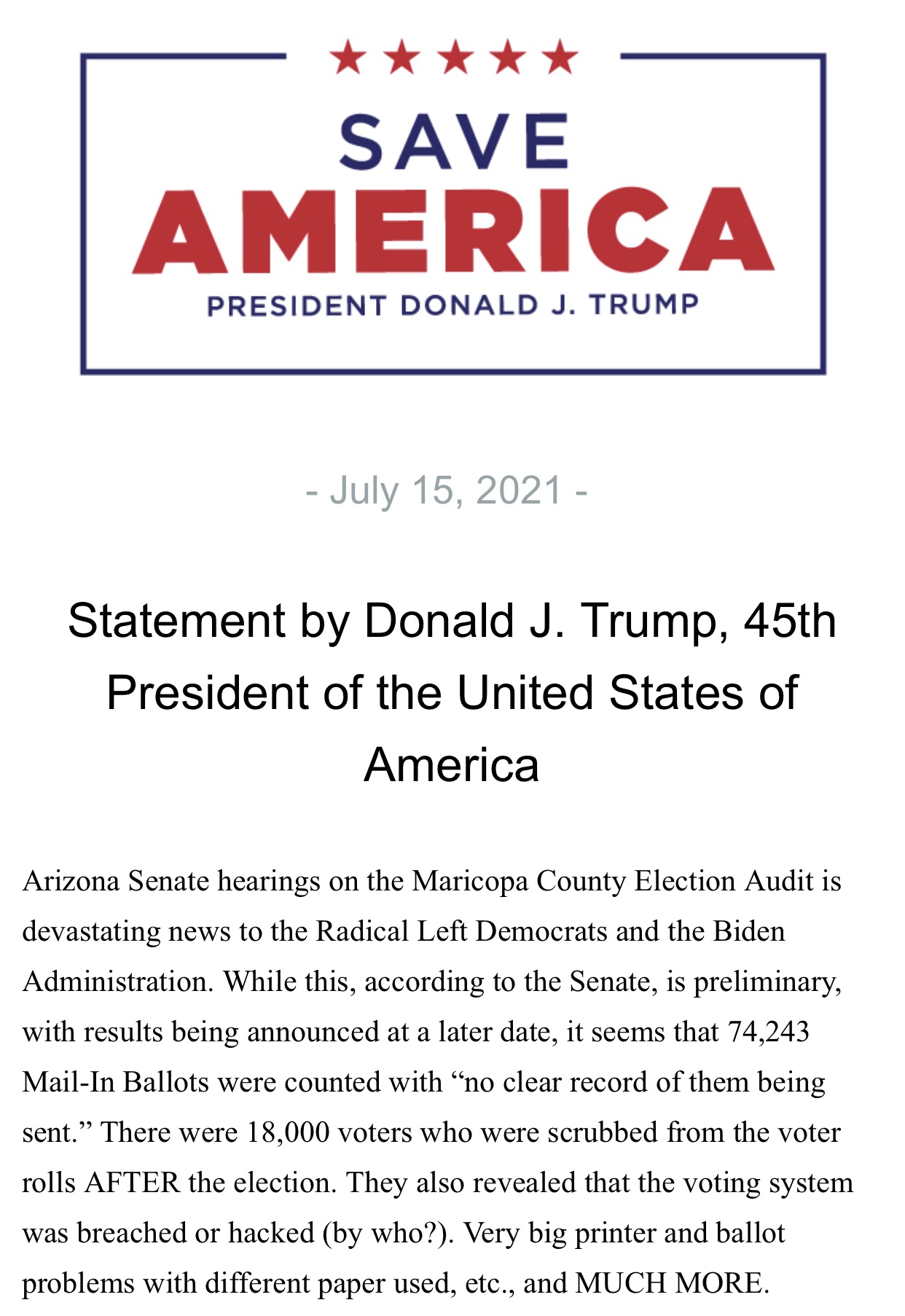 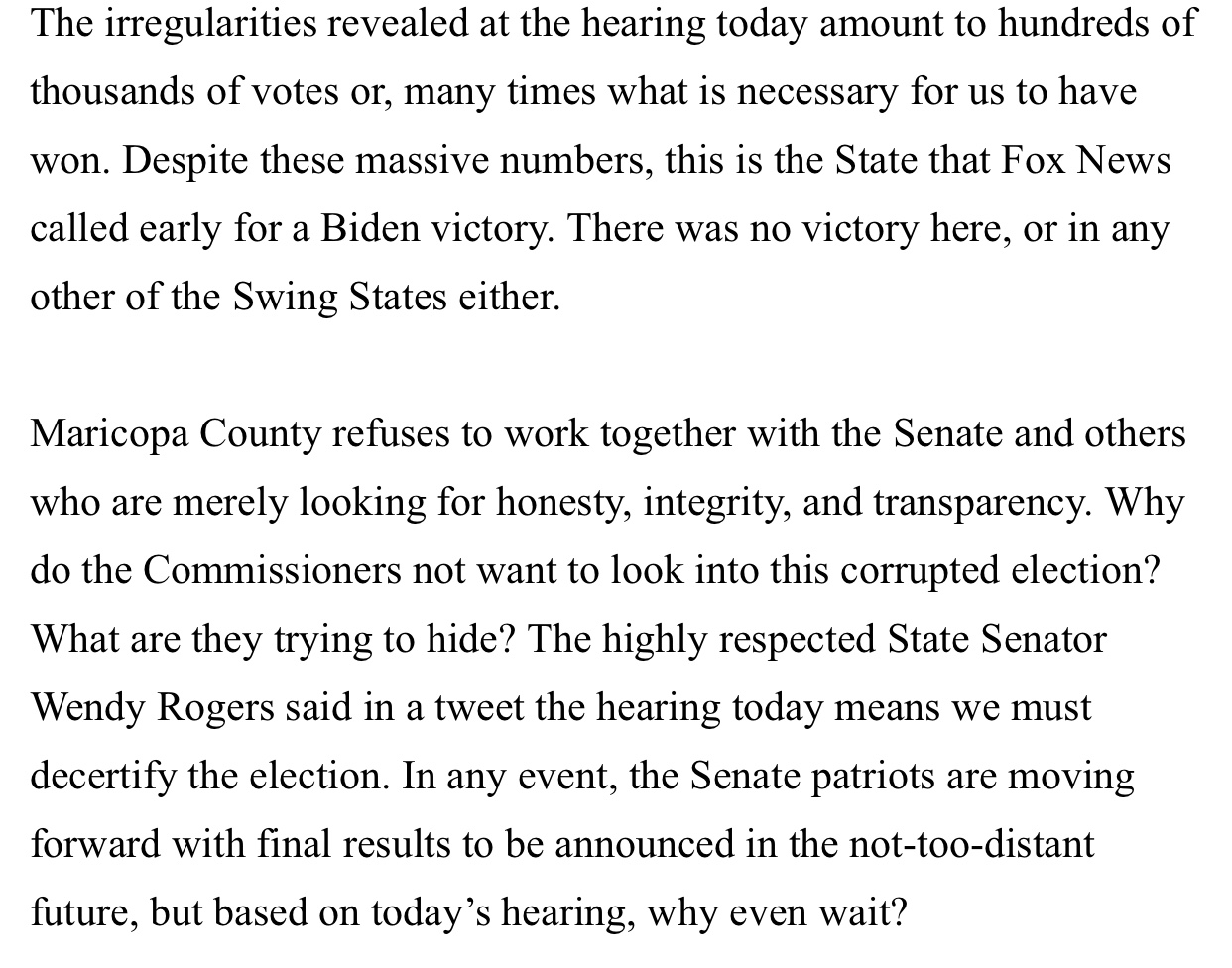 STUNNING in race decided by 10,457 votes

3,981 voted despite registered AFTER Oct 15 deadline

18,000 voted and then were removed from rolls AFTER election

"Some interesting things related to the voter rolls…"

11,326 people VOTED in the election but did not appear on the voter rolls on Nov 7th but DID show up on Dec. 4th pic.twitter.com/7WyJ0jk5xM

18,000 voted and then showed that they were removed from the voter rolls AFTER the election pic.twitter.com/CqZIUxaZz3

Maricopa County election system was BREACHED in November. They privately notified voters, but kept this from the public pic.twitter.com/J7DpP4q0Qu

to turn over, & tens of thousands of unauthorized queries demonstrating how insecure the election was, I call for the Biden electors to be recalled to Arizona & a new election must be conducted. Arizona’s electors must not be awarded fraudulently & we need to get this right.

Start demanding justice NOW. This election was stolen from us. Hold peoples’ feet to the fire.