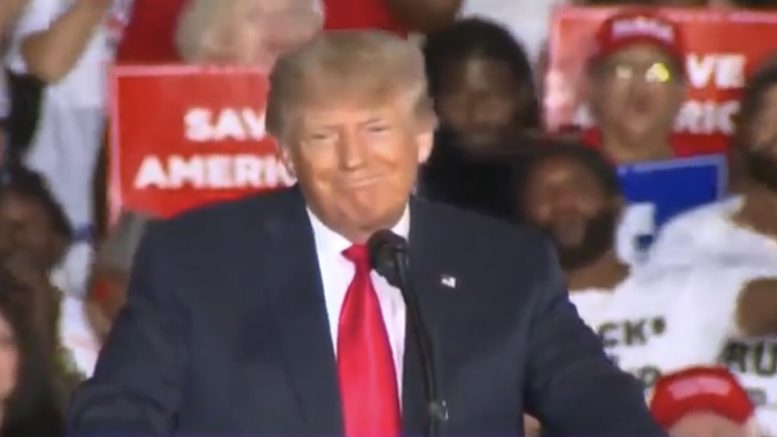 During a Thursday interview on Flash Point with Gene Bailey, 45th President Donald J. Trump weighed in on the forensic audit in Maricopa County, calling the mainstream media the “enemy of the people” for not reporting the “findings” from the audit. He also gave his opinion over why he is still able to draw such large crowds at his rallies.

Asked why so many in mainstream media refusing to cover the election audit(s) around the country following the 2020 general election, the former president replied, “Because the media is corrupt, pastor. You know it was well as I do, and many people know it.”

“Probably the ones that know it best is the media itself. They are corrupt. They don’t tell the truth, and they are, in fact, the enemy of the people. And it’s a terrible thing,” former President Trump said.

“We had a tremendous audit, it was done by the Senate, the Arizona Senate, and they’re brave people. The findings were unbelievable. I mean, far more than the votes we needed. We had a deficit, which was a fake deficit of about a little more than 10,000 votes. And they found 10’s of thousands of votes in all different categories, and it was a disgrace,” he said.

Trump’s remarks come after last week’s release of the Maricopa County forensic audit results, which were revealed during a Senate hearing.

Gene Bailey agreed with the 45th President, telling him that “Americans have lost respect for the media,” adding, “We’re turning that around.”

“I find it very interesting, I’ve watched you and your rallies, post-2020. What does it say? You’re still able to draw such huge numbers in places like Cullman, Alabama and Perry, Georgia. I mean, this is no other elected official in history has ever come close to that. Why do you think that is?” Bailey asked Trump.

“Well, it’s a great honor. They like what I’m saying. Probably they think I’m extremely handsome, but I’m only kidding. But they do like what I’m saying, and frankly, we had 68,000 people as you know as few weeks ago in Alabama, 38,000 in Georgia this past weekend,” Trump replied. Continued Below

“… So I would just say that they like what I’m saying. They want somebody to say it. They don’t hear it much, as you know. You hear these politicians talk and they don’t want to talk about anything, and that’s why our country our country is going so far radical-left. And you know, some people say socialist, some people say communist. I mean, it’s terrible,” the former president said.

Part of the thing with the media as you know, what happens with countries, when you lose your voice, when they don’t say what’s going on, that’s the first step toward communism. And it’s a terrible, terrible thing what’s happening in our country,” Trump added.

(Related: Voter To President Trump At NBC Town Hall: “You’re So Handsome When You Smile”)