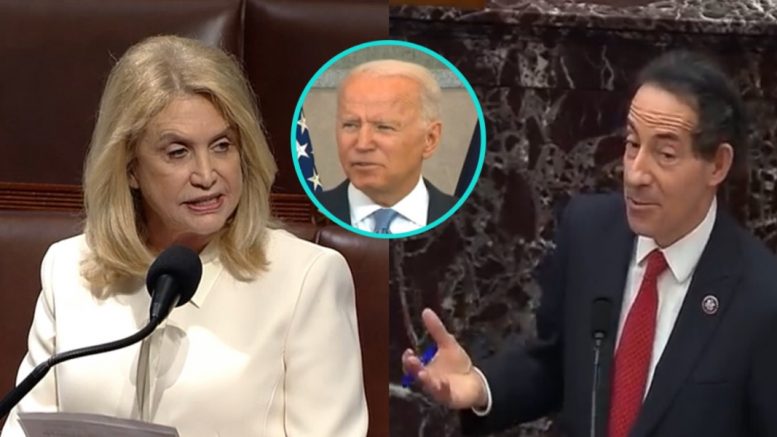 One day after Joe Biden’s “Voting Rights” speech in Pennsylvania, Congressional Democrats, led by the House Oversight Committee, have announced they will be launching a probe into the Maricopa County audit of the 2020 general election in Arizona.

On Wednesday, they sent a letter to Mr. Douglas Logan, Chief Executive Officer and Principal Consultant of Cyber Ninjas Inc. to “to request information about Cyber Ninjas’ participation in an ‘audit’ of nearly 2.1 million ballots cast in Maricopa County, Arizona, in the 2020 election”.

“We are concerned about your company’s role in this highly unusual effort, given Cyber Ninjas’ apparent lack of experience in conducting election-related audits; reports that the company engaged in sloppy and insecure audit practices that compromised the integrity of ballots and voting equipment and were questioned by the U.S. Department of Justice (DOJ); and evidence that you and other individuals funding the audit have sought to advance the ‘big lie’ of debunked voter fraud allegations in the November 2020 presidential election,” the letter said in part, signed by Rep. Carolyn B. Maloney (D-NY), Chairwoman Chairman Committee on Oversight and Reform, and Rep. Jamie Raskin (D-MA), Subcommittee on Civil Rights and Civil Liberties.

“Americans’ right to vote is protected by the Constitution and is the cornerstone of our democratic system of government. The Committee is seeking to determine whether the privately funded audit conducted by your company in Arizona protects the right to vote or is instead an effort to promote baseless conspiracy theories, undermine confidence in America’s elections, and reverse the result of a free and fair election for partisan gain,” the Democrat lawmakers claimed.

Cyber Ninjas is a software security consulting company specializing in ethical hacking, security program development and training. Cyber Ninjas is a Florida-based company hired by the GOP-led Arizona Senate to perform an audit of the 2020 election in Maricopa County.

Maloney’s and Raskin’s letter asked Mr. Logan to produce requested documents by July 28. Officials with the audit have said they expect to release their findings later this summer. Continued Below

“The Committee is deeply troubled by Cyber Ninjas’ lack of election audit experience; its
reported mismanagement of the audit in Maricopa County, which may have compromised ballots and election equipment; your own bias and history of embracing conspiracy theories related to
the election; and the private sources of funding that may have further undermined the credibility
and impartiality of this effort,” the Democrats wrote in their letter.

The Committee is also requesting “for the period between November 6, 2020, and the present, all communications involving you or any Cyber Ninjas employees, consultants, agents, volunteers, or representatives with: former President Donald Trump; any Trump Administration official; any formal or informal representative of President Trump’s presidential campaign, legal team, or political action committee; any representative of Voices and Votes, Fight Back, America Project, or any other funder of the Maricopa County audit; Rudy Giuliani or any of his agents or representatives; Sidney Powell; L. Lin Wood; Patrick Byrne; Michael Flynn; or Michael Lindell.”

“The Committee on Oversight and Reform is the principal oversight committee of the
House of Representatives and has broad authority to investigate ‘any matter’ at ‘any time’ under
House Rule X,” they wrote. Continued Below

The House Oversight Committee’s probe additionally comes after Arizona Senate President Karen Fann reported on Tuesday that the ‘numbers’ from the Maricopa County forensic election audit “do not match” the numbers turned in by the county.

“They haven’t released a number yet, if you will, however we do know that those numbers do not match with Maricopa County at this point,” Fann told KTAR News 92.3 FM’s The Mike Broomhead Show.

“Many of the justifications proffered in support of these post-election audits and restrictions on voting have relied on assertions of material vote fraud in the 2020 election that have been refuted by law enforcement and intelligence agencies of both this administration and the previous one, as well as by every court, federal and state, that has considered them,” Garland claimed in a June 11 speech.

The full letter from the House Democrats can be read HERE. Continued Below

Since beginning the audit work, Cyber Ninjas has been accused of engaging in mismanagement and insecure practices that jeopardized the integrity of ballots and voting machines and could lead to significant errors.

This must be investigated. https://t.co/n6Q5BGErxj

Nonpartisan audits and a hand count found that the election results were valid, but AZ State Senate Rs hired a company accused of insecure practices that jeopardize the integrity of ballots for another audit that serves no legitimate purpose.@RepRaskin and I are investigating https://t.co/OCxLlsy14a

Republican officials already audited AZ's election and found it to be free and fair. So why is a dark-money funded, Trump-allied firm doing yet another audit? @RepMaloney & I are demanding answers. https://t.co/jwnMiZQg0K