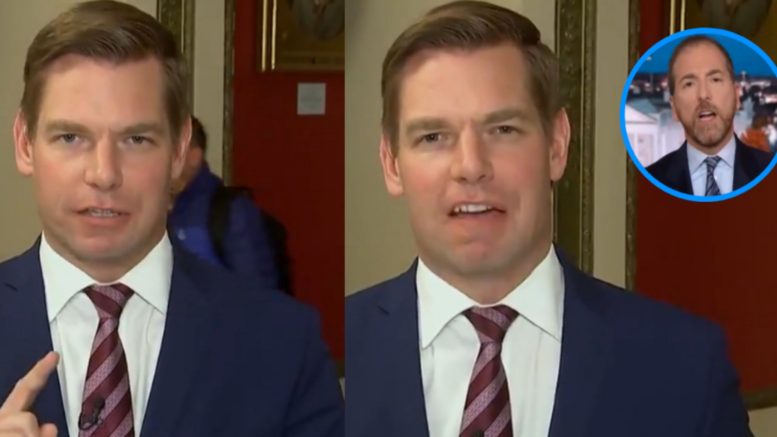 As the last scheduled public impeachment hearings wrapped up on Thursday, Democrat Congressman Eric Swalwell appeared to be confident that the Democrats already have enough evidence to show President Trump committed “high crimes” and “misdemeanors” that could potentially be used to impeach him.

Swalwell made the statement while speaking to MSNBC’s Chuck Todd, who questioned the Congressman on what he expects to happen next.

Chuck said that people within his network are not seeing any indication that there’s an “appetite to see more witnesses” to testify in the impeachment inquiry.

Swalwell responded, “There’s not an appetite by the President to cooperate.”

“So, if the President is going to block Secretaries Pompeo and Perry and Mick Mulvaney and John Bolton from coming forward, we already have powerful evidence of high crimes and misdemeanors to include extortion, abuse of power, obstruction of Congress and justice, and also the impeachable offense of bribery,” Swalwell declared.

“And so, we think the only relevancy to those witnesses at this point is, in fact, that the President won’t let them come in,” he added. “Because if they could help him at all, you could be assured he would allow them to come in.” Video Below

Chuck Todd followed up by stating that if Democrats want to make a “political case,” they would need to have more Republicans “to flip on the President,” and he questioned Swalwell how he could go about presenting that case.

WATCH: Rep. Eric Swalwell (D-Calif.) talks about what will happen next in the impeachment inquiry. #MTPDaily@RepSwalwell: “We’re done for the day, probably for the week. We’re still going to continue our investigation.” pic.twitter.com/IJlO2FqCRl

In ending, here is video of an awkward moment involving Swalwell as he questioned Ambassador Gordon Sondland.

Democrats’ impeachment sham is a JOKE.

If Adam Schiff is the #WitchHunt King…