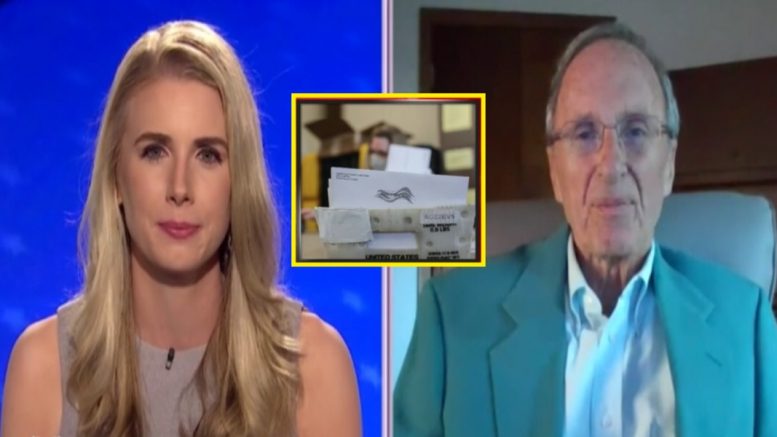 The 45th President issued a statement Wednesday via email from his “Save America” PAC , recommending to readers to watch a video on OAN over a report regarding, “Chain-of-custody documentation missing for 18,901 ballots in Fulton County, Georgia”.

In a stunning admission about the critical chain of custody documents for absentee ballots deposited into drop boxes in the November 3, 2020 election, a Fulton County election official told The Georgia Star News on Wednesday that “a few forms are missing” and that “some procedural paperwork may have been misplaced.” This is the first time that any election official at either the state or county level from a key battleground state has made an admission of significant error in election procedures for the November 3, 2020 election, Tennessee Star reported.

Garland Favorito and eight other Georgia residents, who have sued Fulton County to produce these ballots for a forensic audit, spoke with Natalie Harp on OAN discussing his case– in hopes to review the ballots.

“We are not really surprised by this,” Favorito told OAN’s Harp. “First of all, there should not have been drop boxes to begin with in Georgia. That’s a whole nother equal protection issue. It should have never happened.”

“Ironically, this about the number of ballots that we suspected were counterfeit. And the reason we suspect that is because we have actually 4 sworn affidavits from poll managers, as well as 2 corroborating affidavits from audit monitors, saying that they found these counterfeit ballots when they were doing the audit. And they believe that it scaled into the tens of thousands,” he said.

“What’s interesting about this number that they’ve come up with, 80,000, and since Fulton County didn’t know how to come up with that number … that’s about the exact number that we thought were bad. … We have to have an inspection so we can find out what the truth is, and that’s what we’ve been wanting to do ever since we filed the suit back in December 23,” Favorito explained. Continued Below

Garland Favorito suspects there may be “another delay” in his case as Fulton County officials try to “throw obstacles in our way”.

“I suspect there may be another delay, even though we are going back to court on Monday the 21st, … but we will eventually get to look at these ballots. I’m pretty sure. We’ll find out about these 18,000 [ballots] that are missing– transfer forms,” he said.

“I do think we’ll get some answers, maybe by the end of the summer. It will probably take us that long to get there. And what’s ironic about this is that we have had to fight, … not only Fulton County, but we’ve had to fight the secretary of state and the attorney general, who have thrown up road blocks here in Georgia. We’re basically fighting the establishment of both parties, both the Democrat and the Republican parties is what we’re up against,” Favorito noted. Video Below

“It’s taken awhile, but we’re gonna keep beating them down . We’re not giving up. We’ll get to inspect these ballots sooner or later,” Favorito predicts.