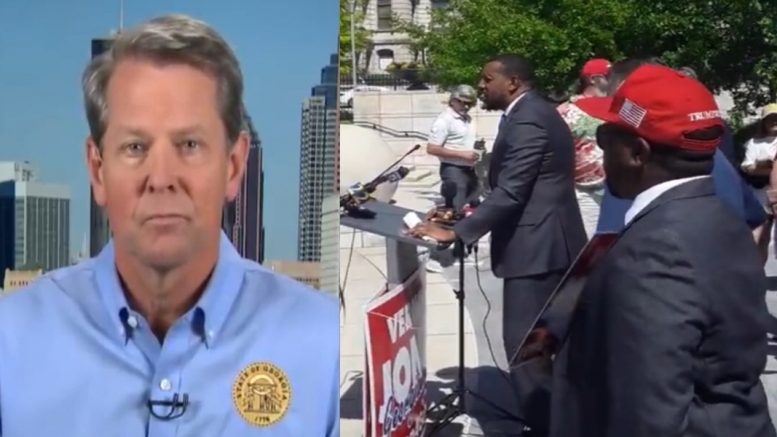 Former Georgia State Rep. Vernon Jones, who announced last month his decision to run for governor of the state of Georgia, called on Governor Brian Kemp, during a press conference Wednesday in Atlanta, for a full forensic audit of Georgia’s 2020 November general election.

“The integrity of our election is nonnegotiable … zero room. And that is why I am here today to call for an immediate forensic audit of the Georgia 2020 election,” Mr. Jones said to a cheering crowd.

“In recent weeks, I have found myself troubled by the recent findings coming out of Arizona as they conduct [a] forensic audit of their own, led by their state legislatures,” Vernon Jones said.

“From this audit, previously unknown findings have since come to light, including reports of missing ballots, broken seals on the boxes, and containers that contain them, and wholly deleted databases with information related to this election. That is not right,” the former state rep. expressed.

“Let me make one thing clear: There’s no place in Georgia elections for those types of shenanigans and the findings of such– an audit would paint a clear roadmap of where we must go from here, in terms of further reform to safeguard our election process. Since day one, my campaign made a commitment of integrity to this election while Brian Kemp sat on the sidelines in the 2020 election, refusing to call a special session to secure our elections– I was on the front line, fighting for election integrity and fighting for Donald J. Trump,” he said.

“Brian Kemp’s inaction cost us both the Congress and the White House. But it is my hope that my action today would bring us closer to ensuring that this never happens again. That is why I’m calling on Brian Kemp today, this day, to order a forensic audit of all 159 counties in the state of Georgia. Over 50% of this state’s population do not trust the election process. We have seen Stacy’s law [Abrams] supersede state law,” Vernon Jones declared. Continued Below

“I’m here with these patriots today, Georgians, who care about our election process. This is not a third-world-country. This is the state of Georgia, the United States,” he said.

“There are too many unanswered questions. What does Brian Kemp have to lose? What happened in the back room deal between Stacey Abrams and the executive branch of government? How is it that Stacey Abrams, with the executive branch, can do something that only with the constitutional powers, are given to the state legislatures? It has to be reviewed and only a forensic audit can determine what happened with these policies and these procedures as they count the votes in this state,” he added. Video Below

The people of Georgia deserve to have faith in the integrity of their elections. pic.twitter.com/3UaMUI4Qxb

Today, I am officially issuing my call for a full and forensic audit of Georgia’s 2020 Election.

While @BrianKempGA continues to sit on the sidelines, I will continue to on the frontlines for the security of our election.

My question to those in the media attacking my calls for an audit today is simple: what scares you so much about transparency?

The only people who don’t want election transparency are the people with something to hide.

The people of Georgia deserve to have faith in their election system.

Levin: “This Election Has Exposed The Complete Collapse Of The Judiciary As A Check On Unconstitutional Acts”