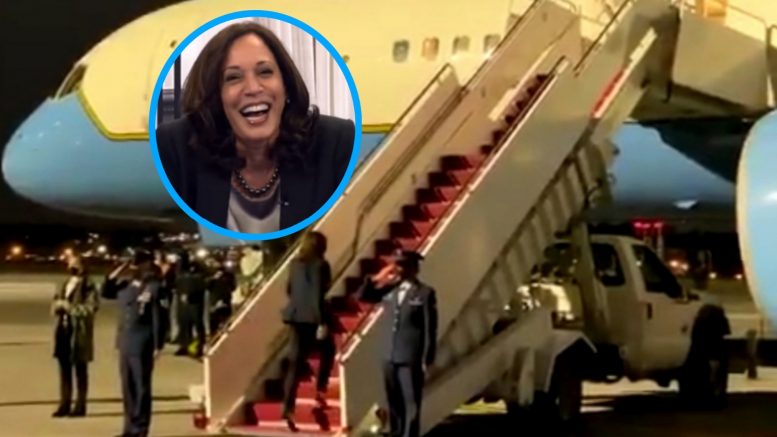 Kamala Harris was blasted on social media after onlookers noticed her not saluting the military before boarding Air Force Two when leaving Atlanta on Friday en route back to Washington, D.C.

While there are no regulations specifying that the president or vice president must salute military personnel, it’s a tradition of respect that has been commonly practiced by all Presidents since the days of Ronald Reagan and was often seen out of the past two Vice Presidents Mike Pence and Joe Biden.

Peter Velz — Director of Press Operations for the Vice President — initially posted a video of Harris boarding the flight on Friday, which drew a cause for concern.

The @VP finishes up her joint visit to Atlanta with @POTUS and boards AF2 on her way back Washington, DC. pic.twitter.com/OUm2TkUNYj

Harris – who once disparaged former President Trump for allegedly disrespecting troops — clearly did not return a salute to the military personnel in the video, and it was quickly pointed out by her opposition.

After seeing the footage, former Acting DNI Ric Grenell declared that Harris made a “mistake” and called for her to “correct it immediately.”

This is a mistake. And she should correct it immediately. https://t.co/fpUJfvzvIr

Kamala Harris doesn’t salute members of the military as she gets on Air Force Two, breaking with a customary tradition of respect

Remember when she and Joe Biden tried to sell the lie that *Trump* was the one who didn’t respect the troops?

DISGRACEFUL: @VP Kamala Harris refuses to salute the honor guard at the steps of the aircraft. It is a clear demonstration of her dislike for those in uniform, both law-enforcement and military. pic.twitter.com/7QFHzamnt7

Sen. Harris was also spotted not saluting military personnel when arriving in Jacksonville, FL on Monday.

In ending, here are videos of former Vice President’s Mike Pence and Joe Biden carrying out the tradition of saluting the military: