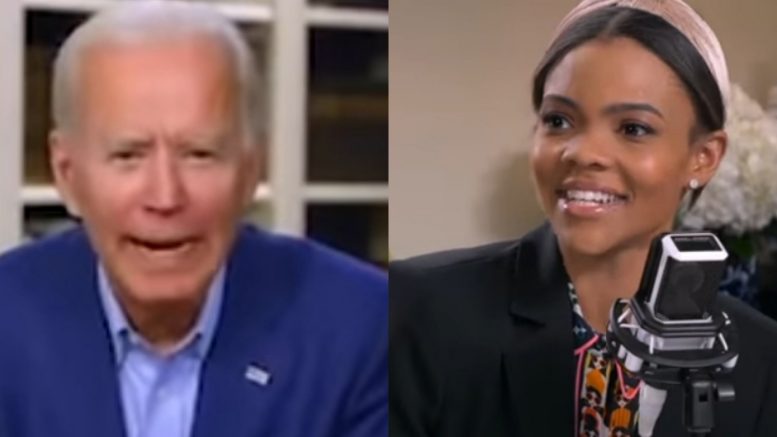 Candace Owens blasted Joe Biden’s “You ain’t black” remarks he made on Friday, which ignited a virtual firestorm.

Biden was met with instant backlash after he claimed during a live-stream with radio show host Charlamagne Tha God from “The Breakfast Club”, that if you support President Trump “then you ain’t black.” He eventually walked back the statement.

Upon learning of Biden’s remarks, Candace brought forth a notion from the 2016 election involving women choosing not to vote for Hillary Clinton and applied it to what Biden suggested during his interview with Charlamagne Tha God.

“If you still can’t see that the Democrats are exactly what they accuse everyone else of being, #YouAintSmart,” she declared.

If you didn’t support Hillary in 2016, #YouAintWoman

If you don’t vote for @JoeBiden in 2020, #YouAintBlack

If you still can’t see that the Democrats are exactly what they accuse everyone else of being, #YouAintSmart #Trump2020 #BLEXIT #MAGA #KAG

-Authored the Crime Bill of 94
-Voted against forcing white kids to bus with black kids.
-Was so pro-segregation, he stated that forced integration was “the most racist concept you can come up with”

But if you’re educated and know all of this, #YouAintBlack

In ending, here are a couple more reactions to Biden’s remarks:

.@JoeBiden says that if I'm supporting @realDonaldTrump than I'm NOT black? Who the hell are you? You don't even know where I'm from. You didn't walk a day in my shoes. You didn't see my mom struggle. You didn't see me work hard to get where I'm at––and you say #Iaintblack? pic.twitter.com/HbFs5EIH8I

JOE BIDEN IS A RACIST!

I WANT EVERY BLACK PERSON TO SEE THIS VIDEO! PLEASE RETWEET

I’m pissed off! Joe said #YouAintBlack if you don’t support him!

He will never get my VOTE!

* RT & USE THIS HASHTAG
👉 #JoeBidenIsARacist

YES WE ARE BLACK & YES WE SUPPORT PRESIDENT @realDonaldTrump #JoeBidenIsARacist for saying we ain’t black because we don’t support him and his foolishness.

President Trump has done back flips, front flips, CartWheels & has bended over backwards to help the black Community pic.twitter.com/8hy9alasfm