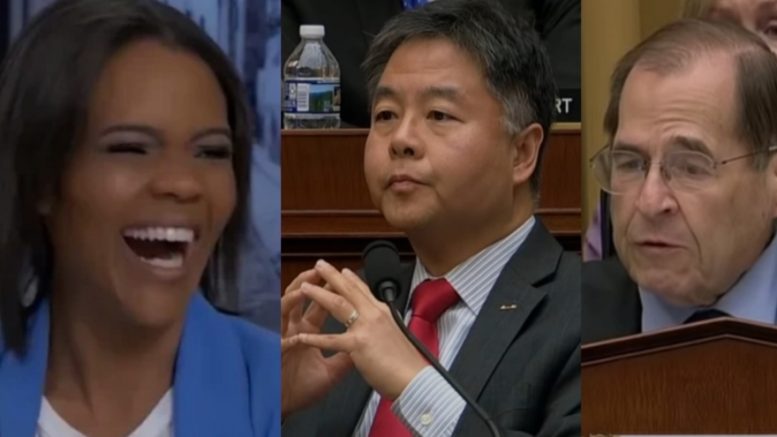 Candace Owens got the full spotlight and then some on Tuesday, while facing off against members of the House Judiciary Comittee regarding online hate speech.

A heated exchange between Candace and Democrat Rep. Ted Lieu immediately went viral on social media, as the pair sparred over a video of Owens discussing Adolf Hitler.

Lieu suggested Owens tried to “legitimize” Hitler to defend nationalism, which caused Owens to accuse Lieu of distorting her comments to smear her and believing “black people are stupid.”

The clip went so viral, it gave CSPAN their most played Twitter video ever, since becoming a member of the platform.

Hours after her now famous exchange with Lieu, Owens took to Twitter to share her favorite 15 seconds of the entire moment with her followers. Video Below

Owens tweeted a 15-second clip of House Judiciary Chairman Jerry Nadler telling Owens that she can’t call members of the panel “stupid,” and then shrugging his shoulders after Owens verified she never said that.

Owens captioned the video, “The greatest part of the hearing today was when @RepJerryNadler simply **shrugs** after I catch him flat-out in a lie. I have literally watched this clip and cannot stop laughing at the audacity of Democrats.”

She then concluded, “They just don’t even care when they’re caught lying.” Video Below

In ending, we leave you with the full exchange between Ted Lieu and Candace Owens, just in case you missed it.

Jordan Rips Mayorkas for ‘Intentionally, Deliberately…Executing a Plan’ to ‘Overwhelm our Country With Millions & Millions of Illegal Migrants’