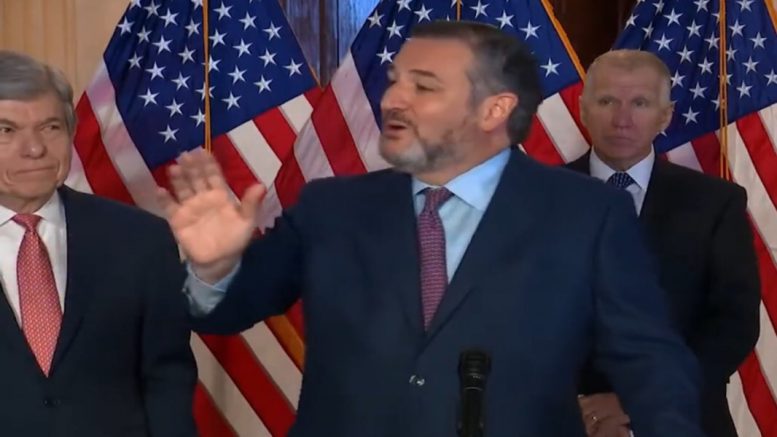 Senator Ted Cruz (R-TX) on Wednesday turned the tables after a PBS reporter asked why he and his Republican colleagues were not wearing masks during a press conference over the filibuster.

The Texas lawmaker fired back and accused reporters of “hypocrisy” for never questioning Joe Biden or Jen Psaki when they speak maskless during their press briefings.

“And by the way, on the question of hypocrisy, you just asked — ‘You people at the podium are speaking without masks'” Senator Ted Cruz pointed out.

“Just once, I’d like to see a reporter say to Joe Biden when he stands at the damn podium in the White House without a mask, ‘Mr. President, why aren’t you wearing a mask?’” he told the reporter.

“Just once, I’d like to see you say to Jen Psaki, the White House press secretary, when she stands at the podium with no mask, ‘Ms. Psaki, why don’t you have a mask?’” Senator Cruz said.

“The questions are only directed at one side, and I got to say, that the American people see the hypocrisy,” he added. Video Below

Sen. @tedcruz responds to a PBS reporter asking him why Senate Republicans aren't wearing masks: "Just once, I'd like to see a reporter say to Joe Biden when he stands at the damn podium in the White House without a mask 'Mr. President, why aren't you wearing a mask?'" pic.twitter.com/qUZFD3ePCZ

After receiving his COVID-19 vaccine, Senator Ted Cruz said in April 2021 that he would no longer wear a mask. “At this point, I’ve been vaccinated. Everybody working in the Senate has been vaccinated,” Cruz told CNN last year while walking through the Capitol without a mask.

Cruz, also last year, said during the Conservative Political Action Conference (CPAC) that Americans were going to be forced to wear masks for “the next 300 years.”

He added, “Not just one mask, two three, four. You can’t have too many masks. How much virtue do you want to signal? This is just dumb.”

(Related: Ted Cruz: Biden Is A ‘Crazy, Lunatic Leftist’ Who Is ‘Setting Us Up to Have a Very Good Election in 2022’)