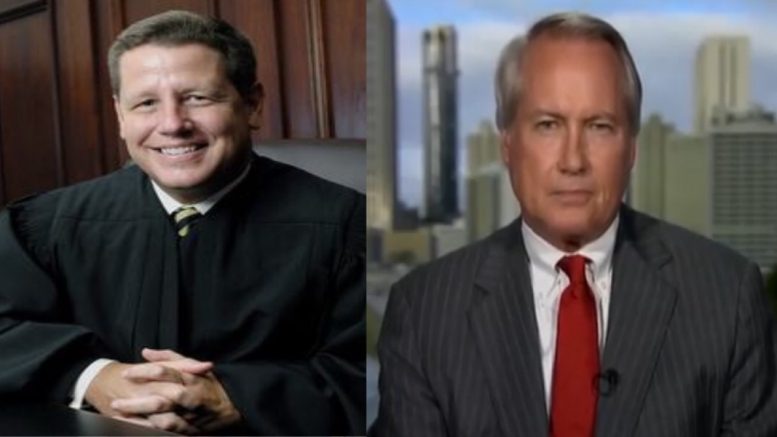 As previously reported by The Freedom Times, Attorney Lin Wood on Sunday, announced that his team filed “an emergency motion for declaratory, emergency, and permanent injunction relief” seeking “Governor Kemp, Secretary of State Brad Raffensperger and the Georgia State Board of Elections to de-certify the election results, along with ordering mail-in and absentee ballots properly verified with signatures.”

The lawsuit also seeks “an emergency declaratory judgement that voting machines be seized and impounded immediately for a forensic audit by plaintiff’s experts”.

Lin Wood attached a screenshot on Twitter Sunday of the order from Judge Timothy C. Batten, Sr. in which the judge said, “Plaintiffs contend that Union County officials have advised that they are going to wipe or reset the voting machines of all data and bring the county back to zero on Monday, November 30.”

“To the extent Plaintiffs seek a temporary restraining order to preserve the voting machines in the State of Georgia, and to prevent any wiping of data, their motion is granted,” he wrote.

“Defendants are ordered to maintain the status quo and are temporarily enjoined from wiping or resetting any voting machines in the State of Georgia until further order of the Court,” Batten ordered.

Shortly after, however, Judge Timothy C. Batten, Sr. walked back his order preventing the Georgia election officials from “wiping or resetting” the voting machines, saying that the defendants claimed that the Georgia counties “control voting machines”. Continued Below

“Defendants cannot serve as a proxy for local election officials against whom the relief should be sought. … Therefore, to the extent Plaintiffs seek emergency relief to impound and preserve the voting machines, that request is denied,” Judge Batten said. Continued Below

Sunday night, Lin Wood posted a third order from Judge Batten, in which the Georgia judge reversed his decision a second time after the Court conducted a Zoom hearing at 7:45 p.m. EST to consider the Plaintiffs’ motion.

“Defendants shall have until Wednesday, December 2, at 5:00 p.m EST, to file a brief setting forth in detail the factual bases they have, if any, against allowing the three forensic inspections. The brief should be accompanied and supported by affidavit or other evidence, if appropriate,” Batten wrote.

“Defendants are hereby ENJOINED and RESTRAINED from altering, destroying, or erasing, or allowing the alteration, destruction or erasure of, any software or data on any Dominion voting machine in Cobb, Gwinnett, and Cherokee Counties,” the judge ordered.

“Defendants are ORDERED to promptly produce to Plaintiffs a copy of the contract between the State and Dominion,” Judge Batten instructed.

In the first order, the judge stated the Court will hold an in-person hearing on the Plaintiff’s motion on Friday, December 4 at 10:00 a.m. EST.