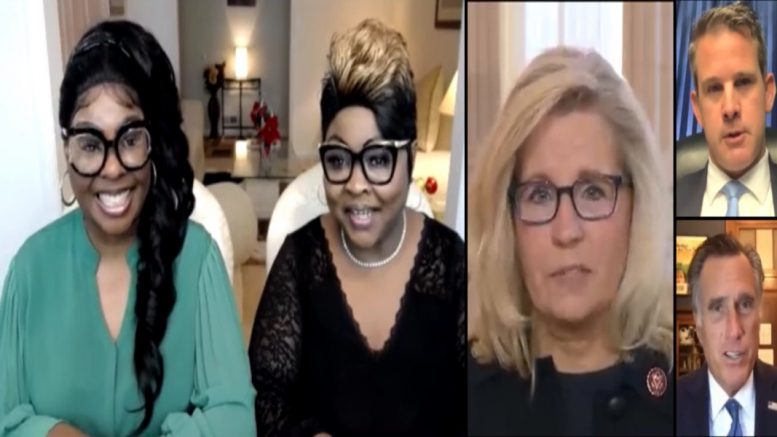 During a Friday interview on “The Water Cooler”, Diamond and Silk told host David Brody, “You’re time is up”, when asked about Republicans who have distanced themselves from the 45th President after the January 6th Capitol breach.

“What’s your message to people like [Sen. Mitch] McConnell and Nikki Haley and some other folks who have come out since January 6th and tried to distance themselves from Donald Trump? What the message to those Republicans, ladies?” Brody asked Diamond and Silk, the co-hosts of the show, “Diamond and Silk: Crystal Clear”, a Saturday afternoon show on Newsmax TV.

“Your time is up,” Diamond (Lynnette Hardaway) expressed. “The Republican Party is a new and reformed Party. It’s a Party of inclusion, including people that may not look like you. And these elitists that want to continue that–want to continue with the statue quo, the Grand Ole Party– doing things the same old way, getting the same results– those days are over with.”

“It was President Donald J. Trump that grew the Republican Party. He made it where everybody– if you want to come in, you can come into the Republican Party. So how dare them want to oust them. When you oust him, you[‘re] ousting the millions of people that he brought to the Party,” she said.

Silk (Rochelle Richardson) responded, telling host David Brody, “It also gave us the opportunity just to see how corrupt the Republican Party is. I view them as one dirty bird with two corrupt wings. They’re no different than Democrats; both Parties are corrupt.”

“But with President Donald J. Trump, he is a person of inclusion. He wants things for all Americans, no matter the color of your skin. It’s not about who’s gonna side with the good ol’ boy syndrome, this is about us being Americans and what can we do, and what can he do to benefit we the American people,” Silk said. Continued Below

When asked who are some names in the Republican Party that may spark their interest for president in 2024 if the 45th President does not run for reelection, Diamond told The Water Cooler host, “Listen David. I haven’t thought about that because we can’t move another further, until we fix what happened November 3, 2020”.

“I know people want to move and act like we don’t see it, want to act like it don’t exist, but it [does]. We are out here on the ground listening to people, and people are still upset. So I can’t think about who next,” she said.

Silk added: “Keep in mind, as long as there is corruption in the system, the swamp gets to pick and choose who they want in any position. What we have to do is uproot the fraud and uproot the swamp. We gotta get rid of the this corruption. How do we recall our government? Because our Constitution is being null and void here. Our Declaration of Independence– how can people have life, liberty, and pursuit of happiness and you’ve got some locked out? Our civil liberates are being trampled on, and we have to get that fixed so we can go another future.” Video Below

Diamond noted: “The American people have to wake up. And what we will say is: it is time for us to drop the Party affiliation and let’s get on the same side. The Party of freedom. Right now this is about our Constitutional rights.”

“This is about our freedom. … It’s time for the American people to wake up, then you’re gonna have to stand up and make your voices heard, and not cower, or act like sheep being led to slaughter, she added.

Diamond and Silk’s full exchange with host David Brody on “The Water Cooler”:

(Related: Diamond & Silk Sound Off On Harris & Pelosi After Their Latest Controversial Remarks)