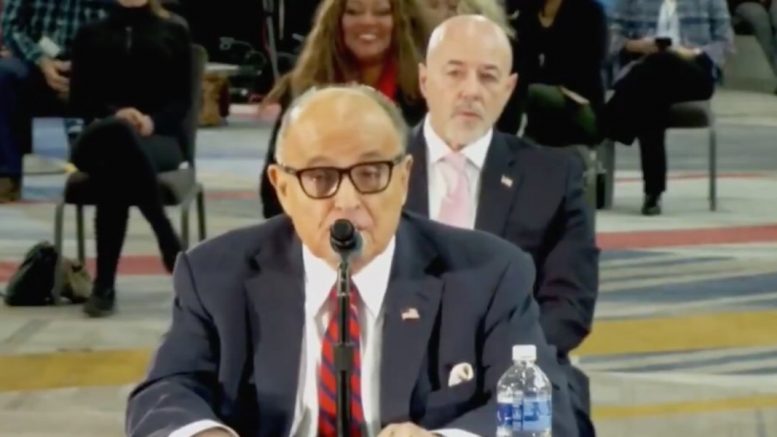 President Donald Trump’s attorneys Rudy Giuliani and Jenna Ellis, alongside witnesses, appeared in front of members of the Arizona Legislature on Monday alleging that considerable voter fraud occurred in the state while also pushing for the GOP-majority state House and Senate to hold a vote on the certification of the election, as reported by The Epoch Times.

“I’m gonna ask you fight and I’m gonna ask you to implore the other members of your legislature, to stand up to this. Do not be bullied, do not be frightened,” the former New York City mayor urged.

“Your political career is worth losing if you can save the right to vote in America,” Giuliani told the Arizona legislature. “At times in our history, men and women stepped forward” to defend Americans’ rights and liberties, he said.

The U.S. Constitution, Giuliani said, stipulates that state legislatures have the authority to certify a state’s electors. “It’s your constitutional power solely. You don’t share it with anybody. That clause doesn’t say congress, it doesn’t say governor, it doesn’t say newspapers. It says the state legislature. And the Supreme Court has said, ‘You can change that and take that power back anytime you want to.’ Because it’s your power, it’s not theirs,” he pointed out.

“Whatever power the governor or the secretary of state thinks they’re exercising, it isn’t theirs, it’s legislatures. You could take it back,” Giuliani encouraged, which prompted applause from members in the audience.”

He added that the Supreme Court has ruled that state Houses and Senates can reclaim the power to name electors. “Based on evidence, not whim, not political bias, not fear of the media, based on evidence you can make the determination. What is the right count? How can we close to the right count as possible?” the president’s lawyer asked. Continued Below

“In history, I swear to God, you will be heroes– to half this [country],” he declared.

Rudy Giuliani also claimed that Democrats used mail-in ballots “as a backup, in case they fell too far behind”, adding, “That’s why they cut off the vote … when President Trump was getting too far ahead.”

“We’ve been warned for 20 years that going to major mail-in ballots … will be fraught with tremendous fraud,” he said, adding, “We were warned by former President Jimmy Carter,” former Supreme Court Justice David Souter, and prominent Democrats to “never do it.”

In Pima and Maricopa counties, there are hundreds of thousands of votes that should be “declared null and void,” the former mayor alleged. There was “clear fraud” where poll workers were observed changing votes in Arizona, Giuliani said, remarking that ballot box-stuffing also occurred.

“If they certify it, they are certifying a false statement to the United States of America … in probably the most important matter we have,” Giuliani said.

Meanwhile, during the hearing, officials certified the results in Arizona:

DURING the #ArizonaHearing on election integrity, Arizona Secretary of State and Governor rush through certifying FALSE election results!

This is misconduct and disenfranchising legal AZ voters!

The legislature MUST ACT to stop this blatant corruption!https://t.co/eGR1EmbVyF

The certification of Arizona’s FALSE results is unethical and knowingly participating in the corruption that has disenfranchised AZ voters.

BUT, this in no way impacts the state legislature’s ability to take back the proper selection of delegates.

Wendy Rogers to AZ’s Secretary of State: ‘You Will Not Be Governor – You Are Going to the SLAMMER’