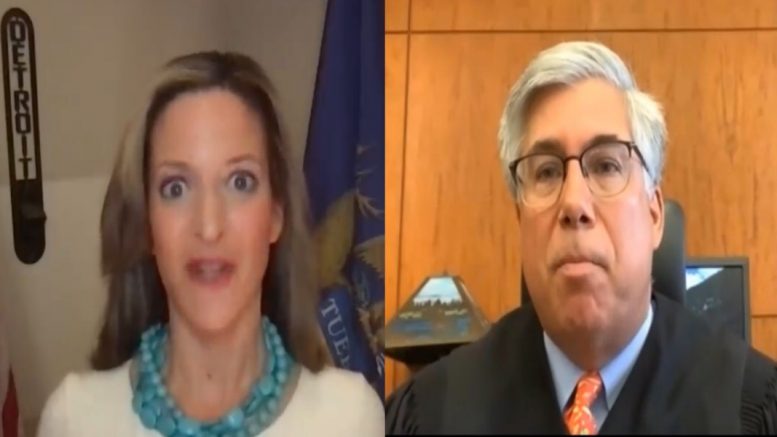 A Michigan judge ruled last week MI Secretary of State Jocelyn Benson (D) violated the Administrative Procedures Act when she unilaterally issued rules related to absentee balloting, legitimizing a key claim made by the Trump campaign in its legal challenges to the 2020 election.

Benson had argued “slight similarities” in signatures on absentee ballots should lead a counter to decide “in favor of finding that the voter’s signature was valid.”

According to the suit, Genetski argued “the presumption contained in the guidance issued by defendant Benson will allow invalid votes to be counted,” but Genetski did not allege “that this guidance caused him to accept a signature that he believed was invalid.”

The court’s opinion concluded: “…nowhere in this state’s election law has the Legislature indicated that signatures are to be presumed valid, nor did the Legislature require that signatures are to be accepted so long as there are any redeeming qualities in the application or return envelope as compared with the signature on file. Policy determinations like the one at issue — which places the thumb on the scale in favor of a signature’s validity — should be made pursuant to properly promulgated rules under the APA or by the Legislature.”

Over 3.1 million Michigan voters cast an absentee ballot out of a possible 7.7 million voters, WWMT News reported. Continued Below

In May 2020, Benson used $4.5 million in funds from the CARES Act — the original coronavirus stimulus — to send absentee ballot applications to all voters, according to Breitbart News.

“By mailing applications, we have ensured that no Michigander has to choose between their health and their right to vote,” Benson said, according to NBC 25. “Voting by mail is easy, convenient, safe, and secure, and every voter in Michigan has the right to do it,” she continued.

Signature validation rules created without the approval of a legislature was one of the issues the Trump campaign and Republicans claimed was done illegally in the 2020 election.

Trump’s campaign and Republicans argued in cases nationwide that Article II of the Constitution requires state legislatures to make the rules governing presidential elections, and state election officials and courts lack the authority to change those rules.

Murray’s ruling undercuts the Democrat narrative that Republican legal challenges to 2020 election procedures were without merit and had therefore all been rejected by the courts. The original suit was filed October 6, 2020 — prior to the presidential election — but was not decided until March 9, 2021.

“If she wants to make changes like these, she needs to work with the Legislature or properly promulgate them through the laws we have on the books — in this case the Administrative Procedures Act,” Hall said, per Detroit News.