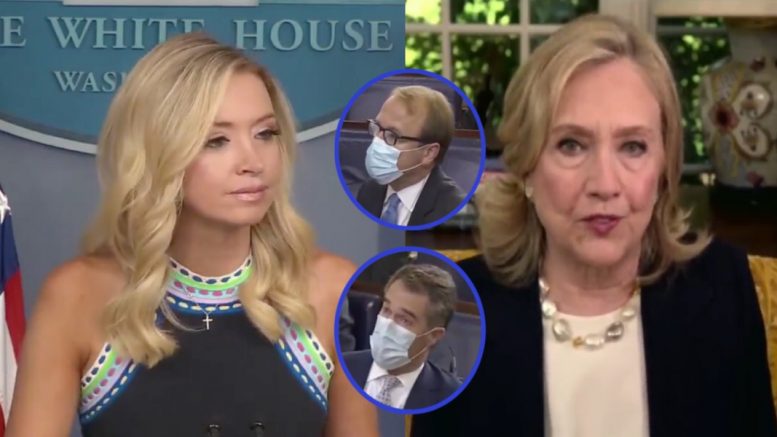 During a Thursday White House briefing, press secretary Kayleigh McEnany was pressed over remarks made by the president on Wednesday regarding whether the president would accept the results of the November presidential election, should he lose. McEnany advised reporters that their “question is more fitting to be asked of Democrats”, quoting Hillary Clinton and others.

White House Playboy correspondent Brian Karem asked the Commander in Chief on Wednesday about a “peaceful transfer of power” after the election, in which the president told Karem, “Well, we’re going to have to see what happens. You know that.”

ABC News’ Chief White House correspondent Jonathan Karl asked McEnany, “If [President Trump] loses this election, can you assure us that there will be peaceful transfer of power?”

“You are referring to the question asked by the Playboy reporter, right?” McEnany asked Karl.

Karl argued, “But I asked you a very simple and direct question. If the president loses this election, will this White House, will this president assure us that there will be a peaceful transfer of power? It’s a very simple question”.

“The president will accept the results of a free and fair election,” McEnany told Karl. “But your question is more fitting to asked of Democrats. In fact, I several of them for you.” Continued Below

The press secretary quoted a few of Democrats’ previous remarks, citing, Rep. Jim Clyburn (D-SC), former Senator Barbara Boxer (D-CA), along with the Washington Post, who wrote in a headline on September 10, 2020 titled: “Democrats may not trust the results of the election if Trump wins”.

“And then, you have that beautiful quote from Hillary Clinton that Joe Biden should not concede under any circumstance. So, I think your question is more fitting for Democrats,” McEnany said.

During an August appearance on Showtime’s The Circus, twice failed presidential candidate and former secretary of state, Hillary Clinton, declared, “Joe Biden should not concede under any circumstances because I think this is gonna drag out. And eventually, I do believe we will win if we don’t give an inch.” Video Below

NBC News White House correspondent Peter Alexander then asked McEnany, “Are the results only legitimate if the president wins?”

JUST IN: Asked if he'd "commit to making sure that there is a peaceful transferral of power after the election," Pres. Trump says, "Well, we're going to have to see what happens." https://t.co/JsAo4rBy2e pic.twitter.com/8haEyDVsdx

(Related: McEnany To Reporters: “Unfortunately, A Bunch Of You Are Very Keen On Doing Selective Editing Of The President’s Quotes”)