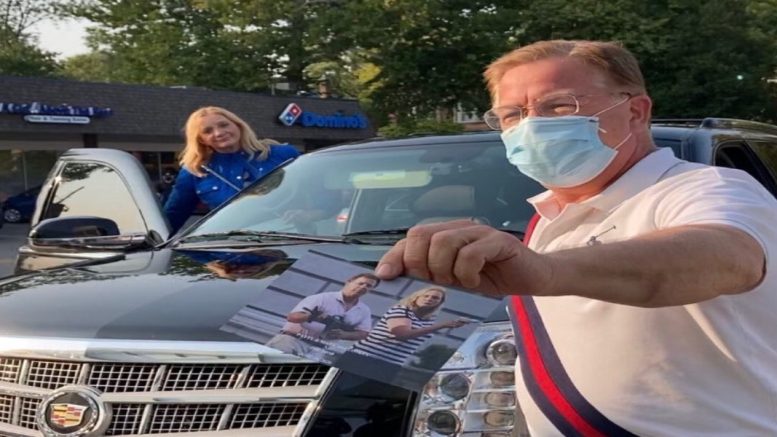 Mark and Patricia McCloskey were seen in a video on Twitter handing an apparent female agitator a specially made card after she hounded the couple while they were leaving a store to get into their vehicle.

Patricia McCloskey is seen carrying a box in the video of “holiday cards” that feature the McCloskey’s standing guard outside of their house with a semi-automatic rifle and a pistol when protestors trespassed outside the couple’s property in June.

A woman is seen in a video shouting obscenities at the McCloskey’s while she followed the couple to their car as were leaving the store.

“You think pointing guns at protesters is nice?” the woman asked in the video. “F— you and your guns.”

“Abolish the suburbs!” she also repeatedly shouted at the McCloskey’s as they got into their vehicle.

Mark McCloskey is then seen getting out of his vehicle to politely hand a photo of him and his wife to the woman who was shouting at them before driving off. Video Below

The Twitter account that shared the video of the McCloskey’s, said the couple got 1,000 photos printed and described them as signed “holiday cards”.

They got 1,000 of these printed and have even been signing them pic.twitter.com/LPAhR8IRAl

Defund 2 Abolish also tweeted a video of the McCloskey’s when they spoke at the Republican National Convention:

Trump invited the McCloskeys to speak at the Republican National Convention where Patricia McCloskey stated that protesters “want to abolish the suburbs all together.” 😭😭 They are clearly out of touch with the protesters explicit demands for the mayor to resign. pic.twitter.com/PZIDwXXCLb

(Related: Cuomo Gets Shredded After Calling McCloskey ‘The Face’ Of ‘Resistance’ To Black Lives Matter)

Portland Adults Entice Children To Say ‘F— The Police’ & Carry Signs, Don Jr. Reacts: “These Parents Should Be Ashamed Of Themselves”