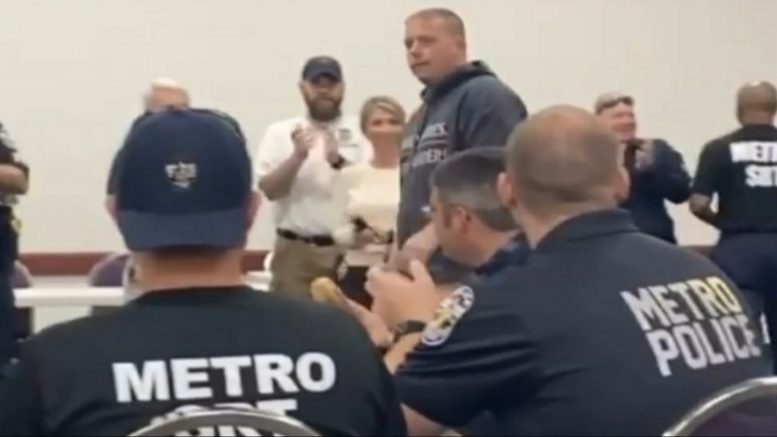 A Louisville police officer showed up for roll call just one day after suffering a gun shot wound to the hip during Wednesday’s protests that erupted following a new development in the Breonna Taylor case.

Maj. Aubrey Gregory, who is a 21-year veteran of the Louisville Metro Police Department, was one of two officers who were injured after shots rang out during the unrest in Louisville.

The other officer who was shot, Robinson Desrouches, is still recovering from surgery after taking a bullet to the abdomen, while the alleged shooter, 26-year-old Larynzo Johnson, has since been charged with two counts of assault in the first degree and 14 counts of wanton endangerment in connection with the shooting of police officers.

A video surfaced on Louisville Metro Police Department’s Facebook page that shows Maj. Gregory walking into a room where roll call was being held, as fellow officers greeted him with a warm round of applause.

According to Fox News, Gregory is commander of the Louisville Metro Police Department’s Special Operation Division and was also leading the department’s efforts during Wednesday’s protest before being shot.

In ending, here is a footage the police department released that captures the moment shots were fired on Wednesday in Louisville: