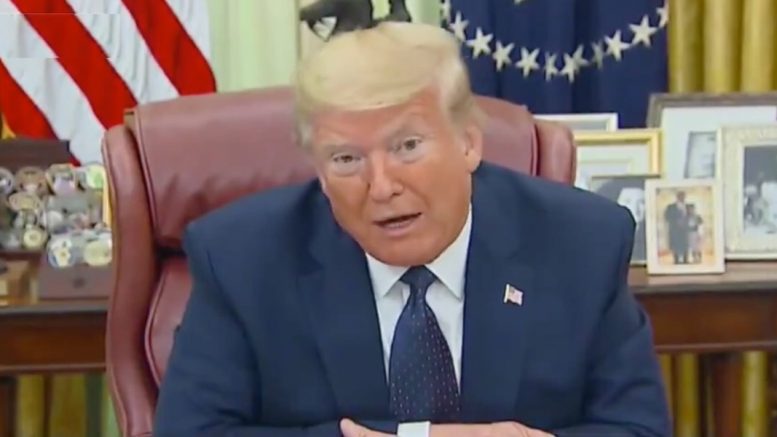 President Trump signed an executive order in the Oval Office on Thursday that interprets Section 230 of the Communications Decency Act of 1996 (CDA) as not providing statutory liability protections for tech companies that engage in censorship and political conduct, Fox News reported.

“My executive order calls for new regulations under Section 230 of the Communications Decency Act to make it so that social media companies that engage in censoring any political conduct will not be able to keep their liability shield,” the president said.

He added: “My executive order further instructs the Federal Trade Commission (FTC) to prohibit social media companies from engaging in any deceptive acts or practices affecting commerce. This authority resides in Section 5 of the Federal Trade Commission Act. … Additionally, I’m directing the attorney general to work cooperatively with the states … to enforce their own laws against such deceptive business practices. The states have broad and powerful authority to regulate in this arena.”

A reporter asked the president Thursday at the signing, “Have you given any consideration to deleting your account and just walking away from this platform you’ve been so critical of?”

The president reiterated: “If there was a fair press in this country, I would do that in a heartbeat. There’s nothing I’d rather do than get rid of my whole Twitter account.”

“But I’m able to get to, I guess reach 186 million people when you add up all the different accounts, if you add Facebook and Instagram,” he continued. “It’s a lot of people. And that’s more than the media companies have, frankly. By a lot.”

“So I’m able to refute fake news, and that’s really important,” the president added. Video Below

BREAKING: President Trump says he would delete his Twitter account “in a heartbeat” if we had a fair press.

President Trump made his position on the matter clear. “The choices that Twitter makes when it chooses to suppress, edit, blacklist, shadow-ban are editorial decisions, pure and simple,” he said. “In those moments Twitter ceases to be a neutral public platform and they become an editor with a viewpoint.”

“What they’re doing is tantamount to monopoly, it’s tantamount to taking over the airwaves,” the president stated. “Can’t let it happen, or else we’re not gonna have a democracy.”

The president tweeted Thursday morning ahead of signing the executive order: “This will be a Big Day for Social Media and FAIRNESS!”

AG BARR: “These companies grew because they held themselves out as public forums… now that they’ve become these very powerful networks of eyeballs.. they’ve now switched and they are using that market power to force particular viewpoints.” pic.twitter.com/DLFLZJwwmu

(Related: McEnany Schools Acosta Over Fact-Checking: “There’s No One That Should Be Fact-Checked More Than The Mainstream Media”)