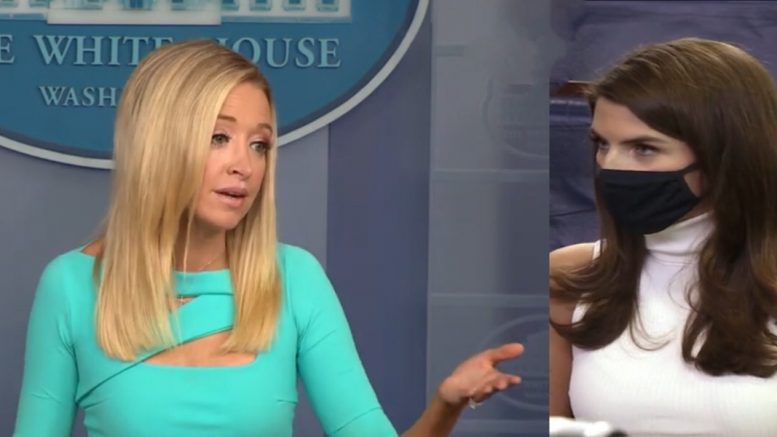 Wednesday during a White House press briefing, press secretary Kayleigh McEnany schooled CNN’s Kaitlan Collins and other reporters in the room, after they apparently tried to selectively edit President Trump’s remarks, which he had said during an ABC Townhall that aired Tuesday evening.

“You said that the president was talking about wearing a mask improperly last night– touching it, referring to what Dr. Fauci has said. But he said, ‘There are people that don’t think masks are good’. That’s clearly not what the CDC director thinks, since he said today that masks are an ‘important, powerful health tool that we have. They could be even more protective against COVID than a vaccine.’ So have any medical experts told the president that masks aren’t good? Or is he only citing non-medical experts like he did last night?” Collins asked McEnany.

“So the president agrees with Dr. Fauci that mask wearing is good, it’s recommended. The president has continually recommended it from his podium but he was just pointing out some of the unintended consequences if not used appropriately,” she added.

Collins interjected to say: “He didn’t say that. He just said there are people who thinks masks are bad”.

“No he did,” McEnany fired back. “Go on, do you have his whole exchange, would you like to read it out?” Continued Below

“Kaitlan, he went on in a very … Unfortunately, a bunch of you are very keen on doing selective editing of the president’s quotes and not referring to the second half,” the press secretary told the CNN correspondent.

“Directly under that statement, he talked about a waiter touching the mask, then touching a plate, and that being an unintended effect of wearing a mask. That is an example of the mask not being used appropriately,” she continued.

“He describes the exact scenario in which a mask can have an unintended consequence if not used appropriately and we can send you the clip, we’ll put it up on Twitter,” McEnany added. Video Below

President Trump’s remarks during the ABC Townhall, which Collins was referring to:

(Related: McEnany Schools ABC’s Karl Over Trump’s Voting Remarks: “I’m Not Surprised The Media Is Taking The President Out Of Context”)

Tucker Blasts Dr. Fauci For Taking Off Mask At Baseball Game: “Masks For Thee, But Not For Me’