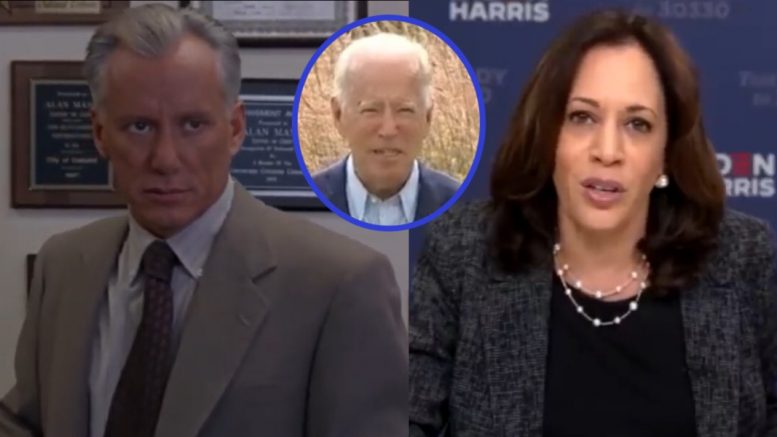 During a virtual roundtable with small business owners in Arizona on Monday, Senator Kamala Harris (D-CA), Joe Biden’s running mate, accidently appeared to suggest that she was at the top of the Democratic presidential ticket, by discussing plans under a “Harris administration.”

"A Harris administration together with Joe Biden…"

Former Hollywood actor James Woods quickly reacted on Twitter upon hearing Harris’ remarks, suggesting she let the cat out of the bag and called her an “insane witch”. Continued Below

“Sweet Mother of God. Why don’t you just put a pillow over his face now, you insane witch?” Woods wondered. “#LadyMacbeth #KillerKamala #HeelsUpHarris”.

Sweet Mother of God. Why don’t you just put a pillow over his face now, you insane witch? #LadyMacbeth #KillerKamala #HeelsUpHarris https://t.co/NWEETMaKj2

President Trump and his supporters have repeatedly attacked Joe Biden as being a “Trojan Horse for the radical left” while other critics have predicted that the former VP is serving as a “placeholder” until Harris is sworn in as president, Fox News reported.

In August, Woods dropped a warning on Americans just before Biden had selected his running mate and retweeted a July article from The Atlantic. The article suggested Biden’s running mate could be “the most powerful” Vice President in history if Democrats win the presidency.

“Well, yes, considering the raging progression of Biden’s dementia, you are either voting for ⁦#PresidentTrump⁩ or #KamalaHarris,” Woods tweeted. “The Trojan horse factor is now crystal clear.”

Well, yes, considering the raging progression of Biden’s dementia, you are either voting for ⁦#PresidentTrump⁩ or #KamalaHarris. The Trojan horse factor is now crystal clear. https://t.co/VORohsBxq7

Related Article: Terrence Williams On Biden’s Choice For VP: “He Chose Kamala Harris Based On Color & Not Character”)

Rep. Mo Brooks To Jim Acosta: “I Do Not Do Interviews With CNN Because I Do Not Trust CNN To Be Honorable Or Truthful”