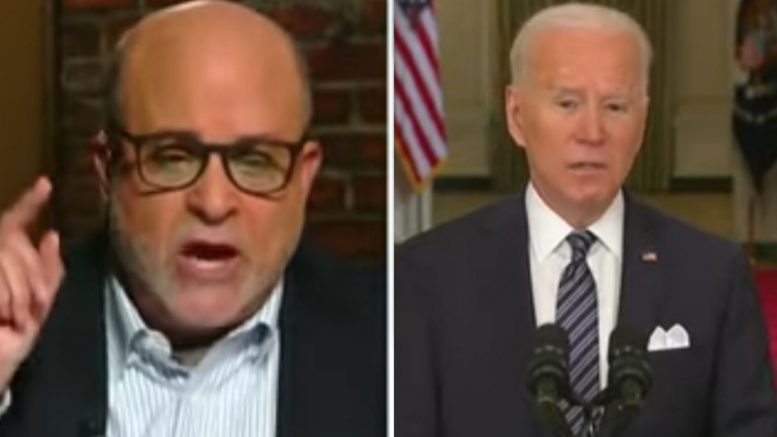 Political commentator Mark Levin was fired up after Joe Biden’s prime-time speech on Thursday, which heavily focused on the coronavirus pandemic and vaccines.

In his 23-minute speech, Biden touted his administration’s efforts against the coronavirus, without giving credit the Trump Administration in regards to the accessibility of the vaccine due to Operation Warp Speed.

“Thank God we’re making some real progress now,” Biden said during his speech. “Now because of the work we’ve done, we’ll have enough vaccine supply for all adults in America by the end of May. That’s months ahead of schedule.”

In response, Levin mocked Biden for implying that he and his administration are solely responsible for the U.S. being in a position to defeat the virus in just 7 weeks after taking control of the White House.

Mr. Levin went on to declare that Thursday’s speech is “the most disgusting propoganistic speech that a demagogue has ever given.”

“Let me tell you something about this guy Biden. He’s a liar, he’s a plagiarist — he’s been since high school.”

“Where do you think these vaccines are coming from?! You think they’re coming from Joe Biden in the basement?! They didn’t have any idea what the hell was going on in terms of the distribution process!

“Trump brought in the Defense Department and HHS and other experts. This distribution process that they’re using now — through the states, through pharmaceutical companies, through Walmart and everything and Operation Warp Speed.

“…In the end — before Donald Trump left office — he had contracted for enough approved vaccines to inoculate 550 million people. It takes time to ramp up. You got to have the channels of production. You got to have the material. You’re competing overseas with other countries and other companies.

“This speech that Joe Biden gave is the most disgusting propaganistic speech that a demagogue — even a politician — has ever given. It is pathetic.” Video Below

Gorka Responds After WH Suspends Playboy Reporter’s Press Pass: ‘Don’t Be A Punk & You May Get It Back’