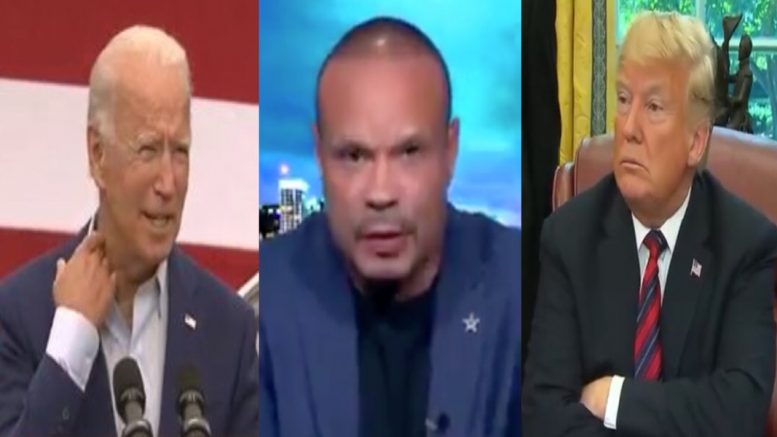 Thursday during Fox News’ airing of “Hannity”, former secret service agent Dan Bongino said that he is “getting very frustrated [with] the media coverage of [Joe] Biden”, indicating that news sources and the media are not being honest about the Democratic presidential nominee.

“When Biden is exposed in the debate, I think it’s going to be devastating,” Bongino predicted, before unveiling multiple instances of how the former vice president is a “liar”.

“Number one, [Biden] is not a good guy. He’s never been a good guy. He’s leveraged his connections to enrich his family at your expense. You paid for him to be vice president, then other people paid his son for skills his son didn’t have, or can’t explain he has to anyone else,” Dan Bongino said, referring to shady business dealings by Hunter Biden.

Hunter Biden secured a lucrative post on the board of a gas company in Ukraine by a Ukrainian oligarch, even though he had no experience in Ukraine or in the energy sector. He was on the board from 2014 to 2019 of Burisma Holdings, Ukraine’s largest gas company for which he was paid as much$50,000 per month, according to the New York Times. Hunter Biden acknowledged in an interview with ABC that he likely would not have been offered the job had his father not been vice president.

In a clip from a January 2018, Joe Biden appeared at the Council on Foreign Relations and is heard appearing to brag about threatening to withhold military aid to Ukraine as a pressure tactic to force the firing of a prosecutor, Viktor Shokin, who was investigating Burisma Holdings.

Hunter Biden’s position as one of nine directors at BHR — a private-equity company controlled by Chinese government-backed stakeholders has also raised red flags. Continued Below

“In December of 2013, one month after Rosemont Seneca’s joint venture with Bohai Capital to form BHR, Hunter Biden reportedly flew aboard Air Force Two with then-Vice President Biden to China,” GOP senators said. “While in China, he helped arrange for Jonathan Li, CEO of Bohai Capital, to ‘shake hands’ with Vice President Biden. Afterward, Hunter Biden met with Li for reportedly a ‘social meeting.’ After the China trip, BHR’s business license was approved.”

Then, in 2015, BHR joined with Aviation Industry Corporation of China (AVIC) to acquire Henniges, which was the ‘biggest Chinese investment into U.S. automotive manufacturing assets to date.'”

Dan Bongino went on to call Joe Biden a liar, saying, “Yeah, he’s a liar! He lies about everything, all the time, and the media covers it up. He lied about the travel ban. Continued Below

Bongino then brought up press secretary for the Biden campaign TJ Ducklo, who refrained from answering whether Joe Biden uses teleprompters during an interview on Fox News, and instead, Ducklo tried to spin it back at Bret Baier, accusing the Fox News host of helping the Trump campaign “funnel questions.”

“That spokesman tonight, TJ– whatever his face was, … please put that guy on Fox every single night. With a guy like that, I mean, Biden probably lost a 100K votes tonight, just with that joker on TV. He couldn’t even tell the truth about the travel ban,” Bongino said of Ducklo.

“I’m begging the Trump campaign, please put up the footage of Biden suggesting he is going to– repeatedly suggesting– he’s going to repeal the Trump tax cuts. Those are middle class tax cuts,” Bongino said. “Just look it up. If you’re in the middle class, your tax rate was 25%. Trump cut it to 22%, meaning your tax rate is going up 3%. You’re going to pay thousands of dollars more.” Continued Below

“He’s a liar. He’s not a good guy. And when he’s exposed in the debate, I think that’s gonna be the end of his campaign,” he added.

(Related: Bongino On Biden Saying He’ll Shut Down The Economy Again If Advised: “Single-Most Damaging Quote Of This Campaign”)