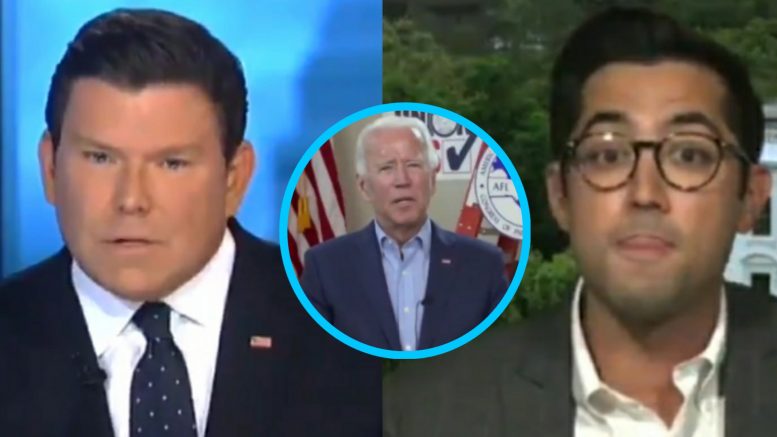 The degree to which Joe Biden uses teleprompters has been a hot topic since the former Vice President appeared to have used one to answer questions from AFL-CIO union members on Labor Day.

Before answering a question, Biden paused and asked a staff member to “move up” what’s been speculated to be a teleprompter.

Here’s another instance, where Biden appears to be motioning his staff to change the teleprompter:

Joe Biden motions to staff to change the teleprompter:

Fox News host Bret Baier hoped to get to the bottom of Biden’s teleprompter use while facing national press secretary for the Biden campaign TJ Ducklo on Thursday.

However, Ducklo refrained from answering any such question, and instead tried to spin it back at Baier, accusing the Fox host of helping the Trump campaign “funnel questions.”

“Has Joe Biden ever used a teleprompter during local interviews, or to answer Q&A from supporters?” Baier asked.

“This is straight from the Trump campaign’s talking points!” Ducklo replied. “And what it does, Bret, is it tries to distract the American people.”

Baier fired back, “They’re using it. They talk about it every day. Can you say ‘Yes’ or ‘No’?”

“I understand, but you can’t answer the question?” Baier asked Ducklo, who responded, “I am not going to allow the Trump campaign to funnel questions through Fox News and get me to respond to that.” Video Below

Here is video of the full interview between Bret Baier and TJ Ducklo:

He repeatedly asked a yes or no question: Has Joe Biden used a teleprompter while on TV?

He refused to give an answer. pic.twitter.com/qTG5OgrpO3