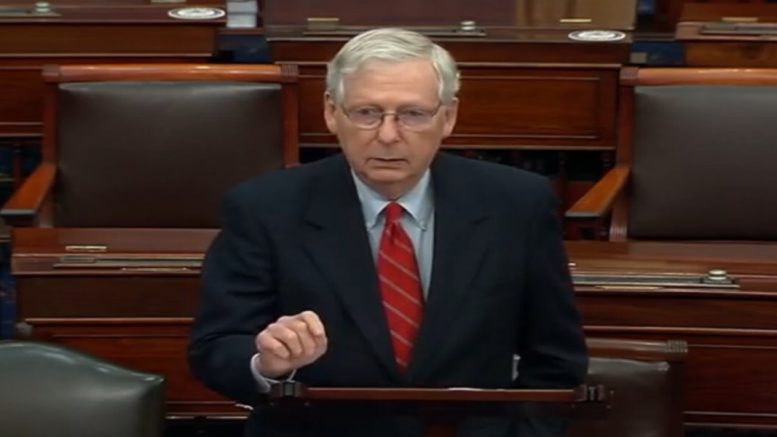 Senator Majority Leader Mitch McConnell (R-KY) delivered remarks on the Senate floor Monday regarding the the 2020 presidential election, saying, “No states have yet certified their election results”, adding that “President Trump is 100% within his rights to look into allegations of irregularities and weigh his legal options”.

“Obviously, no states have yet certified their election results. We have at least one or two states that are already on track for a recount. And I believe the President may have legal challenges underway in at least five states,” Senator McConnell said.

“The core principle here is not complicated. In the United States of America, all legal ballots must be counted; any illegal ballots must not be; the process should be transparent or observable by all sides, and the courts are here to work through concerns,” the Senate majority leader said.

“Our institutions are built for this. We have the system in place to consider concerns. And President Trump is 100% within his rights to look into allegations of irregularities and weigh his legal options,” he explained.

“… If any major irregularities occurred this time, of a magnitude that would affect the outcome, then every single American should want them to be brought to light. And if Democrats feel confident they have not occurred, they should have no reason to fear any extra scrutiny. We have the tools and institutions we need to address any concerns. The President has every right to look into allegations and request recounts under law. And notably the Constitution gives no role in this process to wealthy media corporations,” Senator McConnell continued.

“The projections and commentary of the press do not get veto power over the legal rights of any citizen, including the President,” the Kentucky Senator said. “More broadly, let’s have no lectures about how the President should immediately, cheerfully accept preliminary election results from the same characters who just spent four years refusing to accept the validity of the last election. And who insinuated this one would be illegitimate, too, if they lost again. Let’s have no lectures on this subject from that contingent.”

McConnell continued: “In late August, Secretary Hillary Clinton said, quote, ‘Joe Biden should not concede under any circumstances… I think this is going to drag out, and… he will win if we don’t give an inch.’ That same month, Speaker Pelosi and the Democratic Leader both stated, quote, ‘[President Trump] needs to cheat to win.’”

“In October, when Speaker Pelosi was shopping some conspiracy theory about the Postal Service, she recklessly said, quote, ‘I have no doubt that the president… will lie, cheat, and steal, to win this election.’ Does this sound like a chorus that has any credibility to say a few legal challenges from President Trump represent some kind of crisis?” the Senator majority leader wondered.

“This process will reach its resolution. Our system will resolve any recounts or litigation. In January, the winner of this election will place his hand on a Bible. Just like it’s happened every four years since 1793,” he said. Video Below

“And in no small part that is because we respect the rule of law, we trust our institutions, and neither of those things is outweighed by pronouncements from partisans or the press,” he added.

Here’s how this must work in our great country: Every legal vote should be counted. Any illegally-submitted ballots must not. All sides must get to observe the process. And the courts are here to apply the laws & resolve disputes.

‘Traitor!’: Mike Lindell Rips CBS’ Robert Costa to His Face after Being Confronted at CPAC