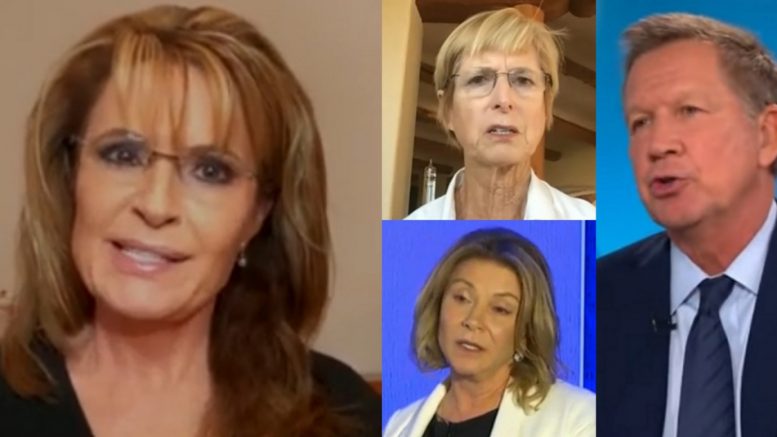 Former Ohio governor John Kasich, former Rep. Susan Molinari and former New Jersey Governor Christie Whitman are among those from the Republican side who will be making the case for Joe Biden at the Democratic spectacle.

Related Article: Right Before Making His DNC Debut, Video Surfaces Of John Kasich Implying That Biden Is A Liar

In response, Palin said, “I think it’s a shame.”

“The two different parties have two completely different platforms,” she added. “And for those who would claim that they are Republicans, meaning inherently, they are to support the platform of that being free enterprise, work ethic, and an expectation for a reward for work ethic, and the sanctity of life — which they would protect standing on the Republican platform — and pro-Second Amendment, all those things everybody knows that a Republican would represent.”

Palin continued: “For these Republicans to be suggesting, if not outright supporting, a platform that is so completely opposite and… would be supporting a ticket that is the most radically liberal ticket in the history of the U.S. — and you know, I’ll debate anybody on that one — I think it’s a shame that they would want to throw their name in the hat there as supporters of a platform that takes me and most common sense, Constitutional conservatives aback.” Video Below

Asked what he thought about Kasich speaking at the DNC on Monday, President Trump replied, “He was a loser as a Republican, and he’ll be a loser as a Democrat.”

Asked about @JohnKasich speaking at the #DemocraticConvention, @POTUS replies: “He was a loser as a Republican, and he’ll be a loser as a Democrat.”