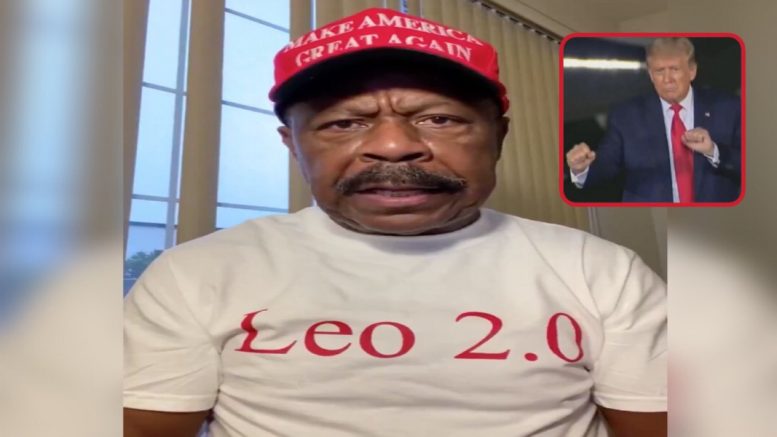 Civil Rights attorney, Leo Terrell, who walked away from the Democratic Party, took to Twitter Friday with a video message, urging Americans and especially Democrats, to vote for President Donald Trump.

Terrell donned a red “Make America Great Again” hat and a “Leo 2.0” t-shirt in his video, saying that he is “going to work his butt off to get Donald Trump reelected” in the upcoming November 3 presidential election, which is 53 days away.

“I’m going to try and convince every single Democrat that they should leave the plantation and vote for Donald J. Trump,” Leo Terrell proclaimed.

He also expressed that he is “sick and tired of Democrats attacking [and] insulting Black Americans who have decided to cast their vote for Donald J. Trump”.

Mr. Terrell also tweeted on Friday the “big difference between the two parties”, noting that “President Trump protects Americans from criminals and Antifa, while “Joe Biden and Senator Kamala Harris protect criminals from police officers and the criminal justice system”.

There is a big difference between the two parties: #PresidentTrump protects Americans from criminals and #Antifia> @JoeBiden and @SenKamalaHarris protect criminals from police officers and the criminal justice system. @realDonaldTrump @seanhannity @FoxNews @DailyCaller @OANN

To back up his previous tweet, Leo 2.0 posted an article from The Federalist, which explains how Harris helped bail criminals out of jail. The article also lists a few of the criminals they found that Harris did a solid for.

In the wake of the deadly fires and looting that occurred in Minneapolis, Harris had asked her five million plus Twitter followers to donate money to bail out the “protesters” arrested in the riots, The Federalist noted.

(Related: Lifelong Dem Leo Terrell Issues A Rallying Message To All Americans: “We Have To Elect Donald J. Trump”)

‘Get Ready’: Trump Announces He Will ‘Very, Very, Very Probably Do It Again’