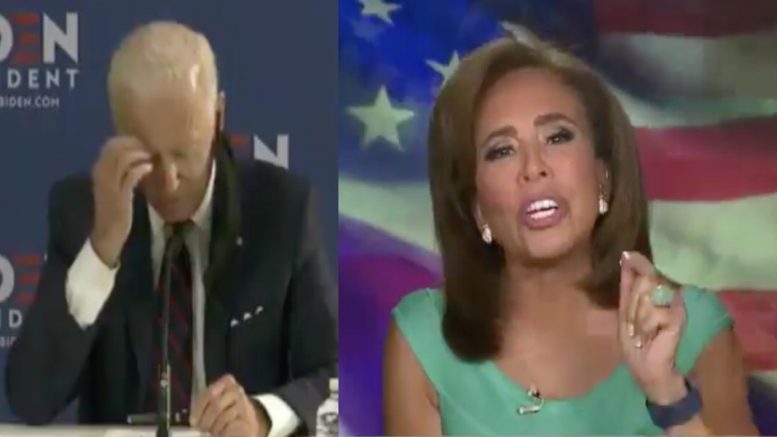 “What is the man running for president, opposite Donald Trump, doing during all of this?” Pirro asked, referring to the ongoing violence.

“Bunker Joe is hunkered down in his basement, scared of his own shadow, afraid to come out, only willing to speak from a script, and certainly not willing to answer any questions” Judge Jeanine Pirro said,, adding that Joe Biden is “hiding” and “leading a campaign of lies to promote his candidacy, but never allowing anyone to question him”.

“No surprise. It doesn’t appear the man has the capacity to even respond to questions,” Pirro continued, appearing to refer to Biden hurrying off  of the stage this week, declining to take questions from the press in New Castle, Delaware.

“But worst of all, Joe Biden, the man who wants to be President of the United States, remains silent as America burns, as police are attacked, as statutes are tumbled and vandalized– as businesses are burned, as three federal officers are likely left permanently blinded as a result of this so-called peaceful protesters, using lasers pointed at their eyes. They are so full of hate,” she declared.

Judge Pirro also pointed out that Joe Biden claimed he did “not” want to “defund the police”, but she asked why he had said during a “Now This” interview that some funding should “yes, absolutely” be redirected from police. Continued Below

“Haven’t we been told that is defunding– taking money from the police budget to other areas?” Pirro wondered.

She continued: “Of course, Biden’s campaign panicked and said, ‘He does not support defunding police’. But in the ‘Now This’ … interview, he said police forces don’t need surplus military equipment, saying that ‘this is what leads them to become the enemy’ in a community.”

“Surplus military equipment for law enforcement, they don’t need that. The last thing you need is an up-armored Humvee coming into a neighborhood, it’s like the military invading,” Biden had suggested during the “Now This” interview earlier this month. “They don’t know anybody. They become the enemy. They’re supposed to be protecting these people.” Video Below

“But do we agree that we can redirect some of the [police] funding?” Ady Barkan asked during the “Now This” interview, to which Joe Biden responded: “Yes, absolutely.”

Pirro went on to say: “Joe Biden is not in touch, folks. Bunker Joe actually thinks he can run for president, not answer any questions, not complete a full thought or sentence. It’s an insult to the American people that this man thinks he can hide in his bunker and come out like a groundhog, reading a teleprompter and refusing to answer questions, all the while, doing the Washington two-step of ‘I didn’t mean what I said, and I really meant what I actually didn’t say’.”

“We are in the most serious election of our lives. … Get ready to fight for the America you love, because it’s going to take a fight to keep it,” the Judge added.

Oh shut up w the patronizing garbage. YOU’RE HIDING IN YOUR BASEMENT while the rest of us are dealing w riots enabled by Democrat politicians. We aren’t alone only because @realDonaldTrump has our backs, isn’t hiding, and is leading us out of this disaster. #getajob https://t.co/HZnyH6POqB