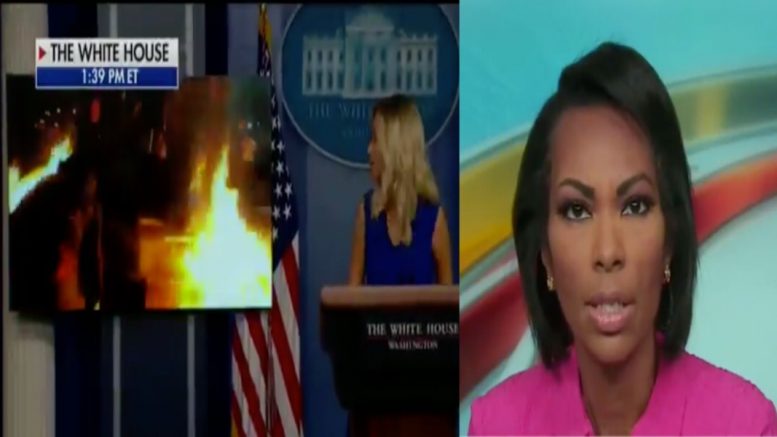 Friday during the White House press briefing, press secretary Kayleigh McEnany played a video compilation showing some scenes of destruction, rioting, and violent crime that has occurred from protesters, activists, and anarchists in Portland, Oregon.

According to chief creative officer Benny Johnson at Turning Point USA, “Most, if not all, cable networks cut away”, from the press briefing, including Fox News, when McEnany played the video clip.

Here is a video clip of what Kayleigh McEnany played during the White House press briefing:

Most, if not all, cable networks cut away..

Meanwhile, Fox News anchor Harris Faulkner told her audience: “We were not expecting that video, and our management here at Fox News has decided we will pull away from that at this time.”

This is what the media don't want to show you.

That's why they cut away as soon as @PressSec started showing this video. pic.twitter.com/tc3AABdxt4

Jack Posobiec, however, pointed out that OANN did not cut away during Friday’s briefing.

Can confirm that @OANN did not censor today's @PressSec briefing, played it in full, and that we will never censor the White House

At the end of the White House briefing, the press secretary condemned the “defund the police” movement and played another video clip of a child excited about meeting a police officer.

.@PressSec ends the briefing by condemning the "defund the police" movement and plays a wholesome video of a young child meeting a police officer. pic.twitter.com/umsRWy76dU

(Related: Portland Adults Entice Children To Say ‘F— The Police’ & Carry Signs, Don Jr. Reacts: “These Parents Should Be Ashamed Of Themselves”)