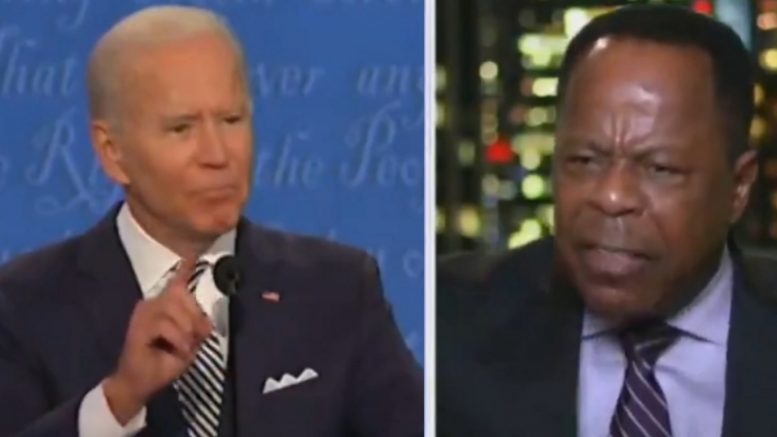 Terrell, who plans to vote Republican for the first time ever in his life, cited Trump having to constantly “fight” throughout the entire debate to get his message out and Biden failing to explain why Black voters should vote for him as two reasons why he was so “upset” watching the debate.

“I’m angry! Let’s go!” Terrell told Fox News host  Sean Hannity following the debate. “Why am I angry? I am angry at the fact that Donald Trump has to fight 24/7 to get the message [out]. It’s Donald Trump versus the leftwing media…Donald Trump should be a gladiator.”

“Can Joe Biden win my vote back? No! Absolutely not! Let me tell you, he’s a liar! Joe Biden’s a liar!” Terrell exclaimed. “He lied tonight! As far as the violence in the cities, he lied! He’s had no plan! And Joe Biden is not a friend to African Americans.”

“And Donald Trump, keep fighting…keep fighting because you can not trust the media,” he concluded. Video Below

@TheLeoTerrell DROPPED BOMBS!!! on @hannity 💣💥💥💥 – "Biden Is Not A Friend to African-Americans, Did Not Explain Why Black Voter Should Vote for Him!" 🔥🔥🔥🔥🔥 pic.twitter.com/t9skwI6Htj

In ending, here are some tweets posted by Mr. Terrell after the debate, where he blasted Chris Wallace’s “unfair” role as a so-called moderator:

I wish I could’ve been #ChrisWallace for 5 minutes. Joe Biden barely had to answer for his terrible track record against #Black Americans. @seanhannity @realDonaldTrump #Debates2020