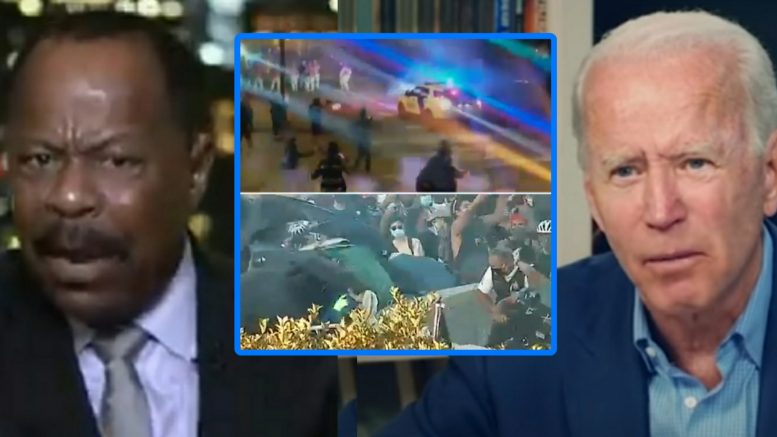 While three federal agents have likely been permanently blinded from lasers pointed at them by Portland protesters, buildings are being destroyed, and blood is being shed amid the constant unrest, Democrats in control of such areas along with party leaders including Joe Biden, are acting as if nothing major is happening and seem as if they would rather ignore it.

“Besides these Democratic mayors and politicians who’s lying about the severity of the lawlessness, you got two cable networks who’s also expanding the big lie and downplaying the chaos in these big cities,” Leo Terrell told Judge Jeanine on her Saturday night program.

“Let me be as clear as I can. These Democratic cities are in complete turmoil and only President Trump is trying to instill law and order,” he continued. “That’s why I’m voting for him. That’s why this Democrat, this civil rights attorney is voting for Donald Trump.”

“Basement Joe has abandoned, abandoned law enforcement,” he declared. “And what else is so significant is that the Democratic party…has been hijacked by extremist groups.”

“Black Lives Matter only cares about a few black lives — not black police officers, not black on black crime in Chicago and not a black Trump supporter who was shot,” Leo stated in reference to 60-year-old Milwaukee Trump supporter Bernell Tremmell, who was murdered in broad daylight on Thursday.

“The next 100 days we have to make sure Democrats, Independents and Republicans vote for Donald Trump,” he concluded. Video Below

We leave you with a pair of tweets Mr. Terrell posted after appearing on Judge Jeanine:

ICYMI: The bloodshed we’re seeing in our major, Democratic run, cities is NOT ok. Let me be as clear as I can, these longtime Democratic run cities are in complete turmoil. This civil rights atty is voting for @realdonaldtrump because he is trying to stop the chaos and blood shed

2/2 I am sick & tired of how #BlackLivesMatter has taken over the #Democratic Party. Get out of your basement @joebiden & speak out for black cops, black children & black business owners hurt by this violent chaos of #BLM & rioters in Portland, Seattle, Atlanta, & Chicago.