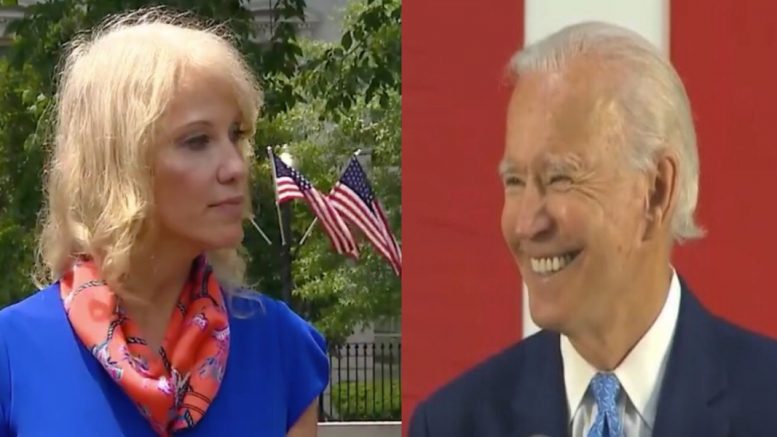 Former acting White House Chief of Staff Mick Mulvaney weighed in on President Trump’s chances in November’s presidential election, saying the Commander in Chief should hope it doesn’t turn into “a referendum” on himself, during an interview Tuesday on Fox Business News’ “Mornings with Maria.”

“If the president can go back to drawing those contrasts between him and [former Vice President] Joe Biden– that becomes a race between Trump and Biden– I think the president does extraordinarily well,” Mulvaney said. “And he shows people, ‘Look, if you hire me, this is what you get. If you hire him, you end up with no jobs.’”

Mick Mulvaney, however, said that if the general election “ends up being a popularity contest or, worse, a referendum on President Trump, I think he’s got some real headwinds to face.”

Asked if she agrees with Mulvaney’s remarks, counselor to the president, Kellyanne Conway responded: “I agree it should be a choice, and every election is a choice.”

She continued: “And I will just recount to you as much as I can, a private conversation I had with the president, excuse me, Mr. Trump on August 12, 2016 when [it] just the two of us in the room, and he asked me to be his campaign manager. I said, ‘Currently the election is about you, and if it’s about you, you can win, but it will be more difficult. If it’s about your opponent’, who’s name I don’t say anymore–less I be accused of still mentioning her name– the one who you guys said would win and lost, her.”

“‘If it’s about her, or if it’s a choice between the two of you, you will absolutely win because people already think certain things about her,'” Conway said of Hillary Clinton on her conversation with then-candidate Donald Trump. “ABC, Washington Post poll– said that 62% of Americans thought she was neither honest or trustworthy.” Continued Below

“So elections are choices. It’s not just are you for Trump or non-Trump, because there is no non-Trump. The person’s name is Joe Biden. He too has a record and a lot of really creepy statements, actions for sure, but statements that he’s made in the past that make me very uncomfortable, certainly as a mother but as a person who breathes air and exercises brain capacity,” Conway expressed.

“It makes me very uncomfortable that he would look at certain other Americans the way he apparently has in the past,” she noted.

Last year, Conway said in an interview on Fox News: “If anybody just types in ‘Creepy Uncle Joe Videos,’ you come up with a treasure trove. Far more evidentiary information and videos than we saw when Brett Kavanaugh’s nomination was trying to be derailed and him, as an individual and family, being destroyed by folks who had no evidence of what allegedly happened 34 years earlier.” Video Below

Conway added, “I think Joe Biden has a big problem here because he calls it affectionate hand shakes. His party calls it completely inappropriate. I think he’s had the worst non-rollout for any would-be 2020 candidate on the Democratic side.”

Kellyanne Conway: "Joe Biden… has a record and a lot really creepy statements, actions for sure, but statements that he's made in the past that make me very uncomfortable, certainly as a mother but as a person who breathes air and exercises brain capacity." pic.twitter.com/pdFQKc7JTW

She also noted that Joe Biden is “not standing up for law enforcement, the flag, or patriotism”, adding: “It’s not very inspirational”.