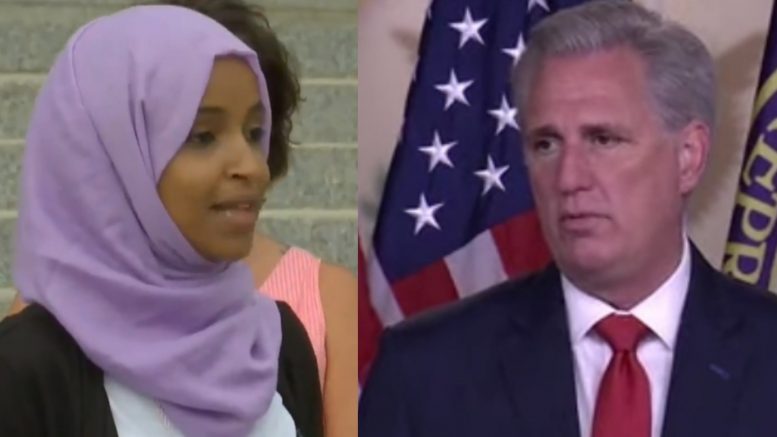 Omar called for such extreme measures to be taken to help prohibit “inequality.”

“As long as our economy and political systems prioritize profit without considering who is profiting, who is being shut out, we will perpetuate this inequality. So we can not stop at criminal justice system,” Omar said.

“We must begin the work of dismantling the whole system of oppression wherever we find it,” she proclaimed.

Related Article: Rep. Omar Gets Blasted After Calling For The ‘Dismantling’ Of ‘Our Economy & Political Systems’

“The Democrat Party has given up on America. All they want to do is tear it down,” he declared. See Below

The Democrat Party has given up on America. All they want to do is tear it down.pic.twitter.com/jtS0yf6NPu

Aside from McCarthy, other GOP leaders issued statements condemning Rep. Omar’s ideology. We leave you with some of their reactions:

America is not a system of oppression. https://t.co/rVtcgRmsn6

Let me be sure I understand, @IlhanMN. Are you having second thoughts about your oath to “support and defend the
Constitution of the United States against all enemies foreign and domestic”…? https://t.co/9Xf1d2Se0P

Ilhan Omar was born in Mogadishu, spent part of her childhood in a refugee camp. She and her family were accepted by the United States and in one generation she has become a congresswoman. Why is she so angry at America. Gratitude might have been better than rage as a response.

Ilhan Omar took an oath to defend and protect the Constitution, not shred it. Omar and her Marxist comrades are a threat to our Democracy. Omar should resign.https://t.co/ujBGxbWXtR

A video in which Rep. Ilhan Omar says the quiet part out loud. Progressives and radical leftists want to tear down statues, tear down the economy and tear down our Constitution!! https://t.co/iyT9evksvC