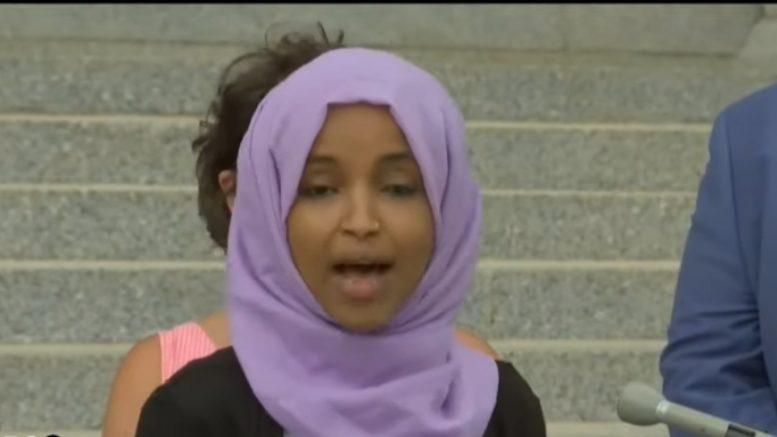 On Tuesday, Congresswoman Ilhan Omar called for extreme action to be taken to prohibit “inequality” in America.

In addition to “dismantling” the criminal justice system that many far left leaders have been advocating, Omar thinks the U.S. “economy and political systems” need to be demolished as well.

“As long as our economy and political systems prioritize profit without considering who is profiting, who is being shut out, we will perpetuate this inequality. So we can not stop at criminal justice system,” Omar said at a news conference.

“We must begin the work of dismantling the whole system of oppression wherever we find it,” she declared.

Omar’s opponent Lacy Johnson put the Congresswoman on full blast after learning of her call to action  and seized the opportunity to plead for campaign contributions. Video Below

Today, my opponent Ilhan Omar called for the “dismantling" of everything that’s good for America.

She called for the dismantling of the US economy and political systems.

Please retweet and contribute to my campaign below. https://t.co/yQgy7q1saD pic.twitter.com/ZSKN8mbS0S

Omar’s remarks come just weeks after she called for the Minneapolis Police Department to be ‘disbanded’ and ‘reimagined’ in wake of George Floyd’s death.

Just days later, the Minneapolis City Council voted unanimously to disband their police department and replace it with a “new public safety model.”

While the idea to disband police has now spread to various Democrat-led areas around America, Omar appears to be riding the momentum in hopes of dismantling other key systems that make up America.

Here are some reactions to Omar’s extreme idea:

Ilhan Omar wants to dismantle our political & economic system. Is this why Democrats are advocating for states to be closed just to use mail-in ballots to cheat?

Jim Crow Joe says he wants to transform America. He already has, by helping to Destroy the livelihoods of Americans!

Radical liberal Ilhan Omar needs to be expelled from the House.

At the very least she should be kicked off the House Foreign Affairs Committee!

RT if you agree!

Ilhan Omar just called for the “dismantling” of the U.S. “economy and political systems.”

This socialist has got to go.

RT if you agree!

This country gave Ilhan Omar everything. She came here for refuge and received it. And then was quickly given power and prestige beyond the imagining of most natural born citizens. She should live every day in gratitude but instead she despises America and most of its citizens.

Let me be sure I understand, @IlhanMN. Are you having second thoughts about your oath to “support and defend the
Constitution of the United States against all enemies foreign and domestic”…? https://t.co/9Xf1d2Se0P

Ilhan Omar took an oath to defend and protect the Constitution, not shred it. Omar and her Marxist comrades are a threat to our Democracy. Omar should resign.https://t.co/ujBGxbWXtR