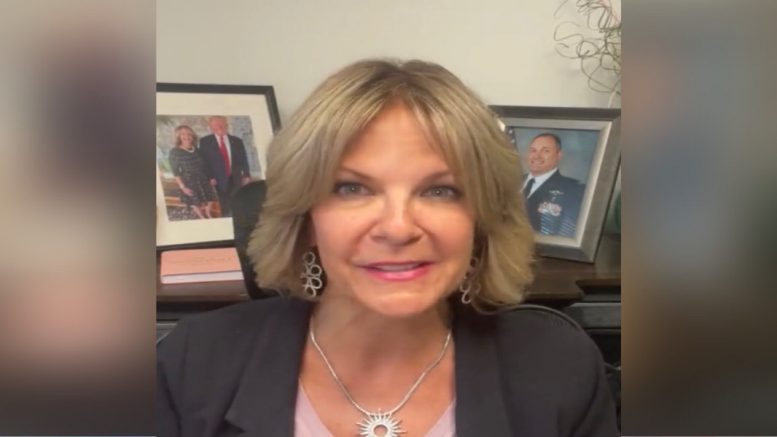 Arizona GOP Chairwoman Dr. Kelli Ward provided an “election integrity” update on Wednesday following the release of Attorney General Mark Brnovich’s 12-page interim report regarding his agency’s review of the reports Senate President Karen Fann delivered to him — related to the forensic audit conducted in Maricopa County over the 2020 election.

In a letter sent to Fann, Brnovich directly stated, “As our state’s chief law enforcement officer, I am very concerned by any potential vulnerabilities in our state’s election systems, including those that the audit and other complaints have alleged. The EIU’s review has uncovered instances of election fraud by individuals who have been or will be prosecuted for various election crimes.” [Emphasis added].

“The EIU’s review is ongoing and we are therefore limited in what we can disclose about specific criminal and civil investigations. Thus, this interim report will focus on what our office can presently share and the current status to our review,” AG Brnovich wrote in the report, as previously reported by The Freedom Times. [Emphasis added]

“The report also says that there are problematic, systemwide issues that relate to early ballot handling and verification,” she explained of the interim report. “The report points out the problems with transporting early ballots from drop locations to the election headquarters. They estimate that between … 100K and 200K were transported without a proper chain of custody.”

“The report [also] points out problems with Maricopa County signature verification of early and absentee ballots. What a surprise. Over the past three elections cycles since Democrats — Adrian Fontes took over as county recorder — the number of early ballots rejected, because of missing or mismatched signatures, has steadily trended down. In 2020, Maricopa County only rejected 587 ballots for mismatched signatures out of 1,908,067 ballots,” Ward noted. Continued Below

“As a comparison, Pima County, which received 428,681 ballots, according to the AG’s report. That is 1,479,386 fewer early and absentee ballots than Maricopa rejected; 572. Nearly the same number. It doesn’t seem right,” she said. “And we all know, it isn’t right.”

“On the single day of November 4, 2020, the Maricopa County recorder ‘verified’ 206,648 early ballot signatures. That comes out to an average of 4.6 seconds per signature. It’s too many ballots in too little time, which the report says leaves the system ‘vulnerable to error, fraud, and oversight problems’. Yes, we know, and we’ve been calling it out since election day,” Dr. Ward pointed out.

The Arizona GOP chairwoman noted the conclusion of the interim report, which says, “Substantial changes must be made to verify early ballots, including adding additional government safeguards”. Video Below

Senate President Karen Fann called on AG Brnovich to open a criminal probe last fall over “several items in the reports that merit your attention of your office” regarding the Maricopa County Election Audit.

(Related: Trump: ‘Now is Finally the Time for the Arizona Attorney General to Issue Warrants & Take his Investigation to the Next Level’)