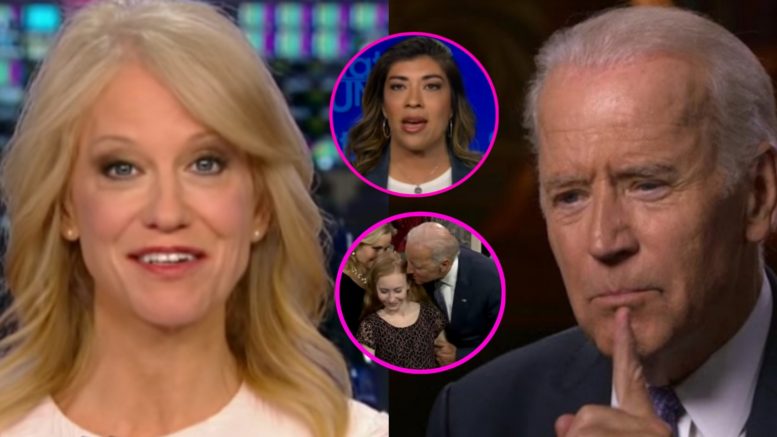 On Sunday, Kellyanne Conway gave her take on the latest allegations against Joe Biden when pressed by Chris Wallace of Fox News.

Biden, who is rumored to be very close to announcing his 2020 bid for President, found himself at the center of controversy as a former Nevada lawmaker accused Biden of inappropriately touching and kissing her. Lucy Flores was running for Lieutenant Governor at the time she alleged the incident happened.

In an interview with Good Morning America, Flores said Biden leaned in behind her, smelled her hair and gave her a slow kiss on the back of the head. She also wrote about the incident per ABC News and said she first felt Biden’s hands on her shoulders before smelling her hair and kissing her.

“He proceeded to plant a big slow kiss on the back of my head. My brain couldn’t process what was happening. I was embarrassed. I was shocked. I was confused,” wrote Flores. “I wanted nothing more than to get Biden away from me. My name was called and I was never happier to get on stage in front of an audience.”

Kellyanne Conway, who has been a victim of sexual assault, weighed in on the allegation against Biden. Video Below

Conway began by saying that it was “quite bold” of Flores to come forward and make a statement against the upper levels of her political party. She then said a lot of the post “Me Too” allegations and insinuations made by females don’t “comport” or agree with Biden’s conduct over the years.

Kellyanne said, “If anybody just types in ‘Creepy Uncle Joe Videos,’ you come up with a treasure trove. Far more evidentiary information and videos than we saw when Brett Kavanaugh’s nomination was trying to be derailed and him, as an individual and family, being destroyed by folks who had no evidence of what allegedly happened 34 years earlier.”

She then concluded, “I think Joe Biden has a big problem here because he calls it affectionate hand shakes. His party calls it completely inappropriate.” And she declared, “I think he’s had the worst non-rollout for any would be 2020 candidate on the Democratic side.” Video Below

Related Article:  Kellyanne Fires Back After Acosta Asks If Trump Will Tell The Truth: ‘You’re Such A Smart–, A Lot Of These People Don’t Like You’

In ending, we leave you with video detailing questionable behavior by Biden.