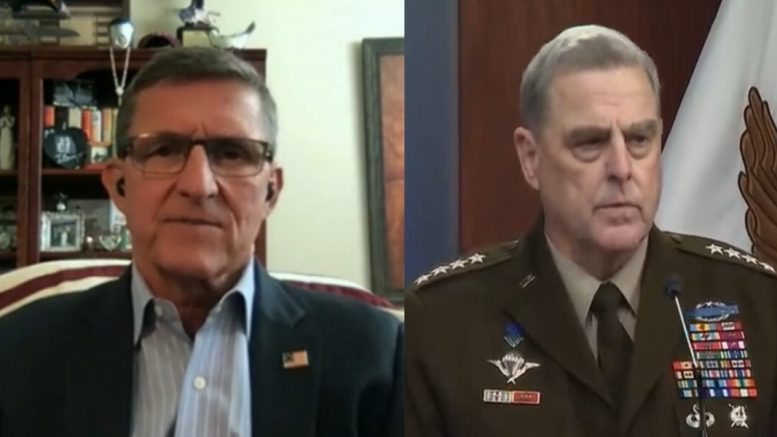 During a Wednesday interview on Newsmax, retired United States Army Lieutenant General Michael Flynn reacted to a story regarding Chairman of the Joint Chiefs of Staff General Mark Milley, who reportedly made two phone calls to Chinese officials in fear that former President Donald J. Trump would create conflict with the communist nation — according to a book authored by Washington Post associate editor Bob Woodward and national political reporter Robert Costa.

ABC reporter covering the White House and Capitol Hill, Ben Siegel, posted a statement from General Milley’s spokesman Wednesday over the Woodward/Costa book . In the statement, it appears Milley does not deny the report.

“That [statement] tells me Milley, in fact, made these statements that have been acquitted to him in Woodward’s book,” Flynn said.

Bolling told Flynn: “He basically admitted that he made those calls in October and January. Now what were the calls about and what was said is still up for speculation, which my point is: making those calls, when a seated U.S. president — literally telling the Chinese government, ‘Don’t worry, I will subvert my own president and work with you to make sure you’re okay.’ How is that not treasonous, sir?” Video Below

“I’ll tell you what it is: it’s illegal, immoral, and it’s unethical. And Mark Milley should be told immediately to drop his stars and he should be resigning in disgrace, if not completely fired and publicly,” Flynn responded.

“The one institution that we cannot lose hope in and faith in — which because, every other institution in government, Eric, the American people have lost faith in. The one institution that still remains in our uniformed military. And Mark Milley is doing grave, grave, which is the strongest word I can use, grave damage to the institute of the military by continuing to stay in the office of the chairman of joint chiefs,” he said.

(Related: Levin: If The Gen. Milley Story Is True, ‘This SOB Needs To Be Out Of There As Fast As Possible’)