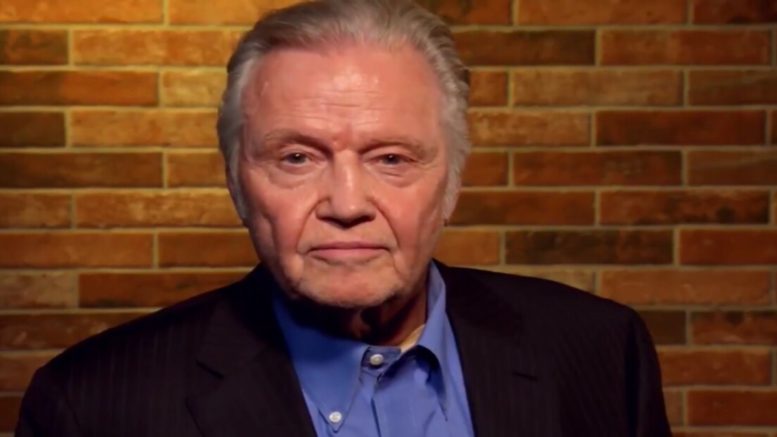 Academy award-winning actor and patriot, Jon Voight, took to Twitter on Tuesday with a powerful message in support of President Donald J. Trump.

AOL reported, the 80-year-old actor has posted another video message praising POTUS on Twitter. Angelina Jolie’s father — who was tapped by the president to be a trustee for the John F. Kennedy Center for the Performing Arts — called Trump the “greatest president” and said a 2020 re-election would be “God’s trust for this nation.”

“My fellow Americans, I stand with you and the truth of our nation, with great pride and honor. I say this truly from a place of God’s truths. Our nation is stronger and wiser because we have taken a chance on a man who has become the greatest President. I’m honored to call him President Trump,” Jon Voight expressed.

“And as we come closer to 2020, let us track all the magnificent documentations that have been signed, sealed and delivered to this country and its glory. We must continue this race of truths and stand with President Trump for his next win,” he continued. “Because this is more than win; this is not a sacrifice. This is God’s honor, God’s trust for this nation. For this land of liberty. For justice for all.”

“This is America, this land of the free. This is our President, Donald Trump, that will set the nation to be the greatest land of peace and love … and great again. God bless,” Voight said.

Voight previously shared videos in May on Twitter where he warned America to not be “fooled by the left” and urged patriots to stand with our President, stand for truth, and declared that, “President Trump is the greatest since Abraham Lincoln!” (Video Below)

Jon Voight is a good man… I treasure his friendship… https://t.co/KWxQNLUlsQ