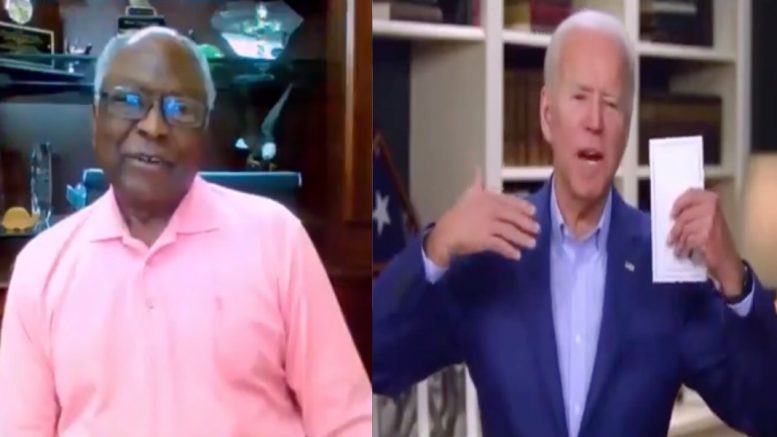 Tuesday on ABC’s “The View”, Rep. James Clyburn (D-SC) admitted that he “cringed” when he heard former Vice President Joe Biden’s remark that “you ain’t black” if people vote for President Trump.

However, he defended Joe Biden, telling the panel on “The View” that no one, including himself, is perfect.

Asked by co-host Whoopi Goldberg about Biden’s remark, Rep. Clyburn said: “I cringed, no question about that.”

“In this instance, Joe did not do as well as I had hoped in responding, but I will say this: I go about my business every day comparing Joe Biden to the alternative– not the almighty,” he continued.

“He is not a perfect person, none of us are, so my decision now is to determine who I feel should be the next president of the United States, and I do that by comparing the candidates to each other, not to the almighty,” the House Majority Whip said.

Biden walked back his remarks last week after telling Charlamagne Tha God during his “The Breakfast Club” radio show that “if you have a problem figuring out whether you’re for me or Trump, then you ain’t black.” Continued Below

Clyburn tried to defuse the criticism aimed at Biden, reiterating: “Look he’s not a perfect person; all of us have misspoken.”

He added that Biden “knows the African American community very well,” further saying: “I’ve done a lot of stuff for Joe Biden over the years and I would not have supported him if I did not think he was best suited to be the next president of the United States.” Continued Below

In the interview, Cavuto had asked Clyburn if he thinks African Americans are “happy” about the way things are going.

Cavuto then asked, “You don’t think that more [African Americans] will vote for the President than he’s generally given credit?” And Clyburn quickly responded, “Absolutely not.” Video Below

NEW: Rep. James Clyburn tells @TheView he “cringed” when he heard Joe Biden’s “ain’t black” comment, but adds, “I go about my business every day comparing Joe Biden to the alternative, not the almighty. He is not a perfect person. None of us are.” https://t.co/Qxd8zSmYrl pic.twitter.com/TXR3oIST0O

Rep. James Clyburn tells us he “cringed” at Joe Biden’s “ain’t black” comment, but says Biden “is not a perfect person — none of us are.”

“I would not have supported him if I did not think he was best suited to be the next president of the United States.” https://t.co/pmnCrwmnmq pic.twitter.com/5ZZmgghlvd