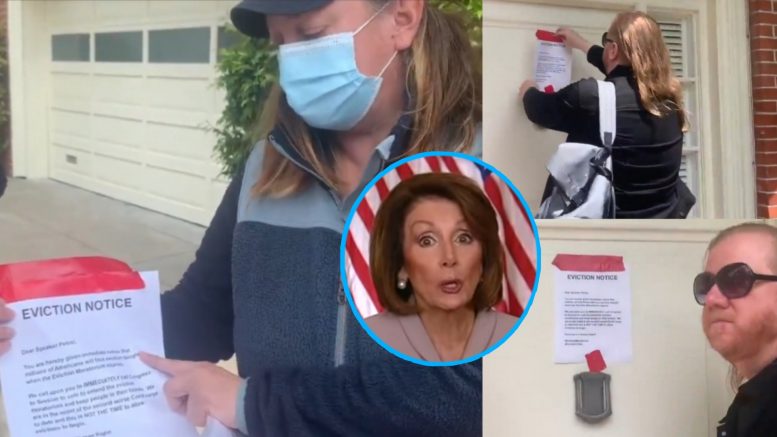 Dozens of housing and homeless activists paid a visit to House Speaker Nancy Pelosi’s home to tape an “eviction notice” on the door of her “beautiful mansion” in San Francisco on Saturday.

The group of around 40 protesters wanted to send a message to the Democrat House Speaker “that millions of Americans will face eviction” beginning Saturday night when an eviction moratorium is set to expire. “The House adjourned for summer recess without passing legislation to extend a nationwide ban on evictions,” Fox News reported.

The House adjourned Friday for a prolonged summer recess without taking a roll call vote on extending the eviction moratorium after the White House made clear Thursday it will allow the ban to expire.

The Biden Administration argued that a recent Supreme Court decision meant the Centers for Disease Control and Prevention (CDC) couldn’t extend the moratorium unilaterally past July 31, and therefore the White House called on Congress to take action “without delay.”

“The reason that we’re at her house is that she has a beautiful mansion in Pacific Heights in San Francisco, and it shows how out of touch she is with the people that are facing a situation [of eviction],” Christin Evans, one of the activists outside of Pelosi’s home, told Fox News. “We wanted to essentially send her a message that we want her to reconvene Congress to take a vote [to extend] the eviction moratorium.”

In solidarity with all people behind on rent and @CoriBush, we’re out at @SpeakerPelosi ‘s mansion delivering an “eviction” notice.

Our Congresswoman needs to convene Congress to extend the eviction moratorium. pic.twitter.com/4Hrpb0OMnZ

Delivering an “eviction notice” to @SpeakerPelosi at her San Francisco mansion to ask she reconvene Congress to extend the eviction moratorium.

6 mil Americans are behind on rent. We’re better equipped than most states here in CA. But we’re here for all of those who can’t be. pic.twitter.com/gnOIsZxDlU

The move by the activists in San Francisco came just hours after Rep. Cori Bush along with other members of ‘The Squad’ and protesters spent the night at the Capitol demanding lawmakers “come back and do their jobs” regarding the eviction moratorium.

We could have extended it yesterday, but some Democrats went on vacation instead.

We slept at the Capitol last night to ask them to come back and do their jobs.