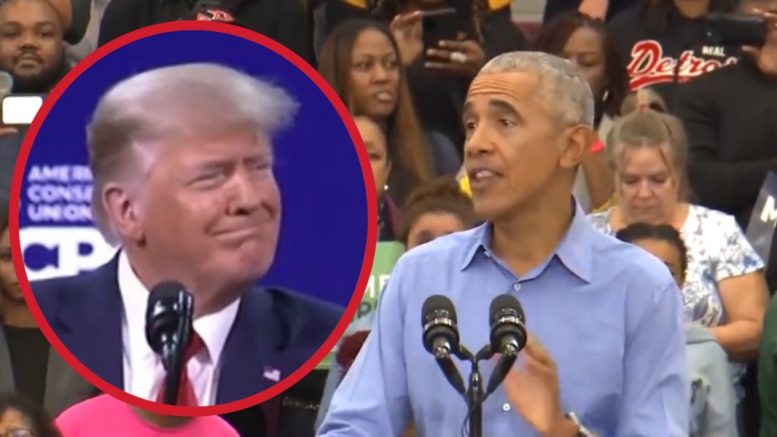 He also claimed the GOP is disinterested in tackling issues affecting people and accused Republicans of being more “interested in making you angry.”

“But these days just about every Republican politician seems obsessed with 2 things: owning the libs, ‘Ah man we’re gonna own the libs,’ and getting Donald Trump’s approval. That seems to be their agenda,” Obama said.

“They are not at — currently at least — They are not interested in actually solving problems,” he claimed.

“They are interested in making you angry and then finding somebody to blame, because that way they’re gonna — they’re hoping you may not notice. You may be distracted from the fact that they don’t really have any any answers to your problems,” Obama said, without elaborating.

At a different campaign event in Michigan, while stumping for Democratic Governor Gretchen Whitmer, Obama was heckled and interrupted by a protester when reading his prewritten speech from a teleprompter.

OBAMA: "These days just about every Republican politician seems obsessed with 2 things: owning the libs, 'Ah man we're gonna own the libs,' and getting Donald Trump's approval. That seems to be their agenda." pic.twitter.com/TCwRyMVll4

Obama gets heckled by a protester:

“Listen everybody… HEY — y’all up there pay attention” 😂😂😂 pic.twitter.com/f8RBGPrR1H

Related: Trump: “Does Anybody Really Think That Biden Beat Obama With The Black Population In Select Swing State Cities, But Nowhere Else?”