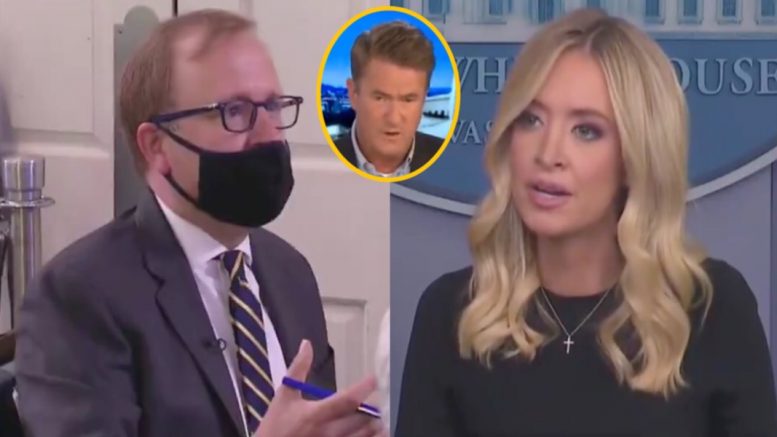 Florida intern Lori Klausutis died at age 28 from an apparent head injury back in 2001 when Scarborough worked as a Republican Florida congressman. Klausutis was found dead at her desk and had an undiagnosed heart condition. Her death was ruled accidental, but it has sparked many conspiracy theories, Daily Caller reported.

In the surfaced video, Don Imus said: “Don’t be afraid to be funny, because you are funny. You know, I ask you why you won Congress, you said you’d had sex with the intern and then you had to kill her, that’s pretty risky to say.”

President Trump has taken to Twitter raising the question over Scarborough’s intern, and more recently on Tuesday, he tweeted: “The opening of a Cold Case against Psycho Joe Scarborough was not a Donald Trump original thought, this has been going on for years, long before I joined the chorus.”

Trump added: “In 2016 when Joe & his wacky future ex-wife, Mika, would endlessly interview me, I would always be thinking about whether or not Joe could have done such a horrible thing? Maybe or maybe not, but I find Joe to be a total Nut Job, and I knew him well, far better than most. So many unanswered & obvious questions, but I won’t bring them up now! Law enforcement eventually will?” Continued Below

On Tuesday, White House press secretary Kayleigh McEnany was asked about the president’s tweets by ABC’s Jonathan Karl. “Why is the president making unfounded allegations? I mean, this is pretty nuts, isn’t it? The president is accusing somebody of possible murder. The family is pleading with the president to please stop unfounded conspiracy theories. Why is he doing this?” Karl asked.

Karl argued that Trump shouldn’t tweet about it, because he is the president, which prompted McEnany to respond: “Joe Scarborough– if we want to start talking about false accusations, we have quite a few we can go through– Mika Brezenski accused the president of being responsible for 100,000 deaths in this country. That’s incredibly irresponsible.” Video Below

“They’ve dragged his family through the mud,” McEnany continued. “They’ve made false accusations that I won’t go through. I won’t say from this podium against the President of the United States. And they should be held to account for their falsehoods. Joe Scarborough should be held to account for saying people by taking hydroxychloroquine. Nevermind the millions of Americans and people across the world who take it for rheumatoid arthritis and other reasons. There [is] a litany of false headlines.”

.@PressSec BLASTS the press for ignoring the fact that Joe Scarborough joked about his intern’s death to Don Imus. pic.twitter.com/XO8TtFE9ZA

Joe Scarborough with Don Imus in 2003: