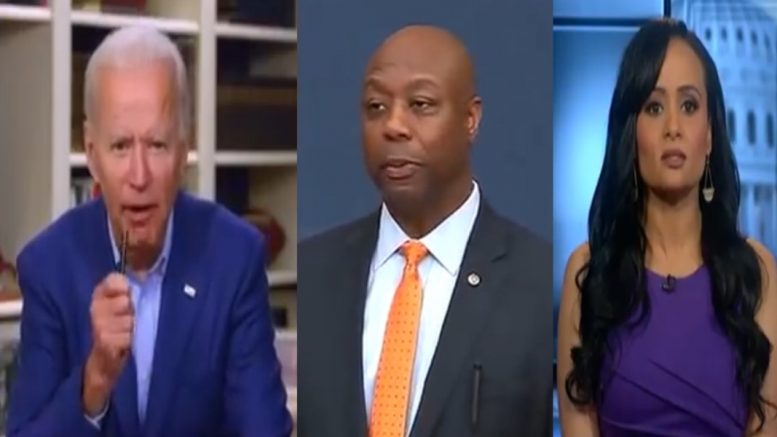 During a Friday live-stream with radio show host Charlamagne Tha God from “The Breakfast Club”, Democratic presumptive nominee Joe Biden appeared to defend his record on race, telling the host that if you support President Trump “then you ain’t black.”

An aide tried to cut off the interview after 11 minutes because Jill Biden needed the office to do her own live-streamed event, but Biden agreed to stay on longer, The Hill reported.

After 18 minutes, the aide interjected, which prompted Charlamagne to say: “You can’t do that to black media”.

“I do that to white media and black media because my wife has to go on at 6 o’clock,” Biden responded. “Uh oh. I’m in trouble.”

“Listen, you’ve got to come see us when you come to New York, V.P. Biden,” Charlamagne said. “It’s a long way until November. We’ve got more questions.”

“You’ve got more questions? Well I tell you what, if you have a problem figuring out whether you’re for me or Trump, then you ain’t black,” Biden told Charlamagne. Continued Below

Charlamagne replied to the former vice president by saying “It has nothing to do with Trump. I want something for my community.”

“Take a look at my record, man,” Biden answered. “I extended the Voting Rights Act 25 years. I have a record that is second to none. The NAACP has endorsed me every time I’ve run. Come on, take a look at the record.”

Katrina Pierson, senior advisor to President Trump’s campaign and leader of its Black Voices for Trump group, responded in a statement on Twitter to Biden’s remarks, expressing that what he said was “racist and dehumanizing”. Continued Below

“White liberal elitists have continuously dictated which black Americans are allowed to come to the table and have a voice. It is clear now more than ever, following these racist and dehumanizing remarks, that Joe Biden believes black men and women are incapable of being independent or free thinking,” Pierson said.

“He truly believes that he, a 77-year-old white man, should dictate how black people should behave. Biden has a history of racial condescension and today he once again proved what a growing number of black Americans and I have always known– Joe Biden does not deserve our votes,” she added in the statement.

Senator Tim Scott (R-SC) also accused Biden of lecturing black people on how to vote and or questioning the racial authenticity of conservative black voters.

“1.3 million black Americans already voted for Trump in 2016. This morning, Joe Biden told every single one of us we ‘ain’t black.’ I’d say I’m surprised, but it’s sadly par for the course for Democrats to take the black community for granted and brow beat those that don’t agree,” Sen. Scott tweeted. Video Below

BIDEN: "If you have a problem figuring out whether you're for me or Trump, then you ain't black."

1.3 million black Americans already voted for Trump in 2016. This morning, Joe Biden told every single one of us we “ain’t black.” I’d say I’m surprised, but it’s sadly par for the course for Democrats to take the black community for granted and brow beat those that don’t agree.