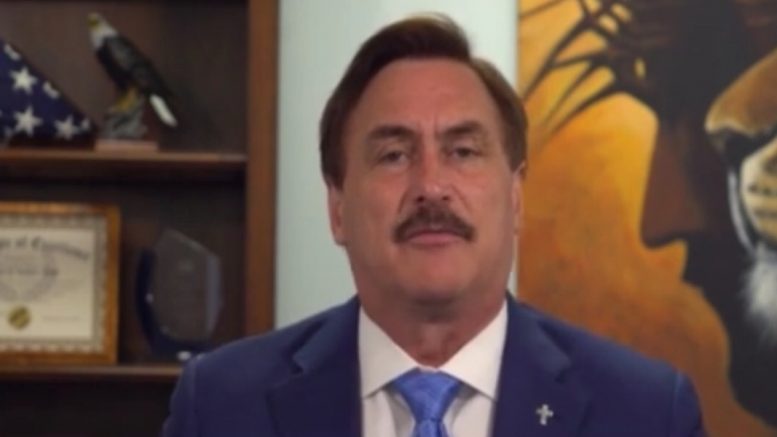 MyPillow’s $1.6 billion lawsuit against Dominion Voting Systems is moving forward. In a ruling on Monday, a judge in Minnesota denied Dominion’s request to have the case dismissed. In April, MyPillow CEO Mike Lindell announced the suit, which accuses Dominion of suppressing speech and attacking the company, OAN reported Tuesday.

“This is a free-speech case. This is a First Amendment case,” Lindell said in April on a livestreamed broadcast when announcing the lawsuit.

Lindell spoke with Steve Bannon on “War Room” Tuesday, expressing, “That is a huge ruling– that they used lawfare basically against MyPillow and attacked MyPillow for no reason, and nobody’s reporting this. … It’s like crickets”.

“It’s moving forward, and now I can be very aggressive with Dominion”, Mike Lindell declared.

“Shame on Fox [News], shame on Newsmax” Lindell said of the cable news networks for not reporting the case. “I mean this is where we’re at. You know, here’s Fox hiding in foxhole over there, just not even talking about the news. … That’s just news. I just think it’s shameful. … This is big news. … This is a fight for our First Amendment right of free speech for our country,” Lindell explained.

“If that judge in D.C. rules Dominion can go forward with their lawfare to scare people like Fox and all these other people into not talking, it’s over. And then here in Minneapolis, they say that we get ruled that ‘Yes, this case can move forward’, [be]cause that’s exactly why MyPillow went after them. Alan Dershowitz said this case in Minneapolis will be the most important case in history for our First Amendment rights of free speech. This should be big news to Fox! Shame on you Fox!” he proclaimed.

“This is a huge case everyone and this was a huge win for us yesterday, and nobody’s talking about it. I’m not gonna take it. We can’t take it as a country. … If that judge yesterday would have ruled the other way and said, ‘Nope, you can’t sue Dominion for coming after you with lawfare’– instead that judge made a right ruling. He said, ‘We’re not gonna take it in our country. You can keep going after Dominion'”, Lindell said.

“Fox better wake up, because you know what? They won’t have anything to report pretty soon. What are they gonna do, go report the weather? You know, that’s why they’re losing viewership. … Their viewers are going down. How do I know that? I advertise on these places. If they don’t start reporting the news no matter what it is, and they don’t have to take a side– shame on them,” Lindell expressed.

Mr. Lindell also announced the dates of his Cyber Symposium.

“It’s gonna be August 10, 11, and 12. … All the cyber guys will be invited, the cyber experts that have the certain credentials … and they’ll be vetted. All the media, maybe even Fox. What a concept if they would even make it. Maybe they’ll actually consider it news, the biggest in history. And then have all the congressmen and senators,” he said.