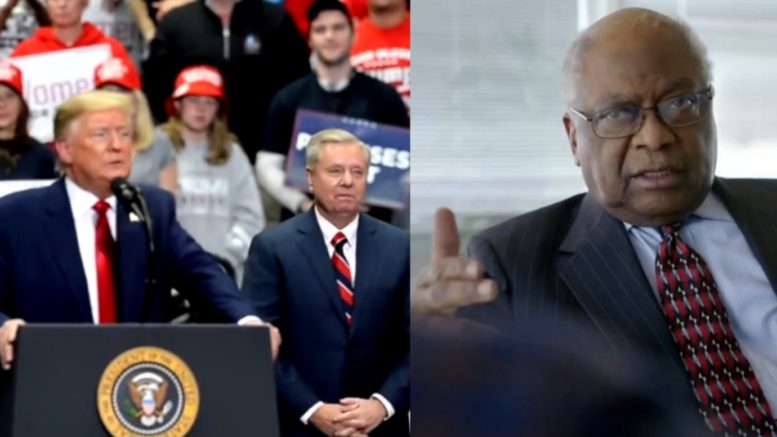 House Majority Whip James Clyburn (D-SC) compared the “dynamics” of President Trump and the Republican Party to the rise of Nazi Germany in the 1930s.

Clyburn made the remarks while interviewing with Jim VandeHei on “Axios on HBO”.

“This country, if we’re not careful, are gonna repeat some history that’s not pleasant,” Clyburn told VandeHei.

“That’s the kind of stuff that took place after 1932 in Germany,” Clyburn proclaimed. “I do believe that [if] this country, this electorate is not definitive in this election this year, this country could very well go the way of Germany in the 1930s. I really seriously feel that.”

Moments later, Mr. Clyburn tried to sharpen his claim when he suggested that Republicans knew President Trump told “31 lies” in his State of the Union Address, but cheered him on anyway. He then compared it to how Adolf Hitler rose to power. Video Below

“The people of Germany knew Adolf Hitler was lying, but they cheered him on. And before they knew it, they no longer had a chancellor, but a dictator,” Clyburn declared. “Anything that’s happened before can happen again.”

When asked what happened to cause Republicans to go down this path, Clyburn said, “I don’t know what happened…I think the poster child would be Lindsey Graham.” Video Below

This is the state of the Democrat Party in 2020: No substance and just disgusting vitriol. pic.twitter.com/jbTkHdTSb3