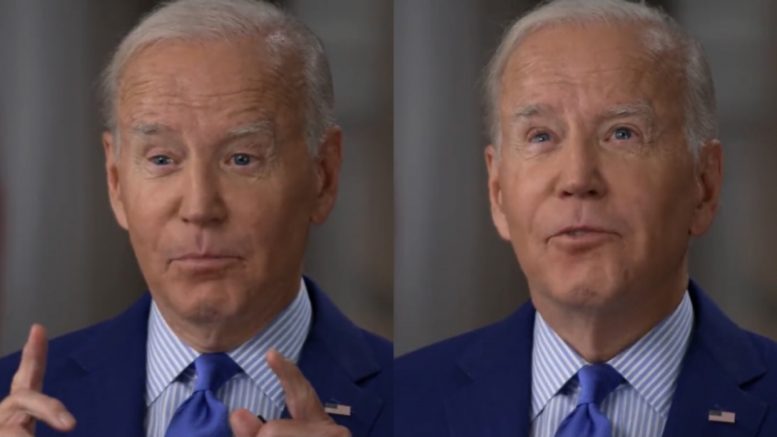 “I no more think of myself as being as old as I am then fly”, Joe Biden bizarrely told Scott Pelley during a CBS “60 Minutes” after admitting he is old.

“Oh, it’s focused,” Biden said of his cognitive health before chuckling. “I say it’s … I think it’s … I haven’t. Look. I have trouble even mentioning, even saying to myself in my own head the number of years.”

“I mean, it’s just not, uh — I haven’t observed anything in terms of — there’s not a lot of things I don’t do now that I did before, whether it’s physical or mental or anything else,” he added.

Joe Biden will be 80-years-old on November 20. He is the country’s oldest chief executive in American history. Video Below

"What do you think of people who say you are unfit for the job of President?"

BIDEN: "Watch me… The proof of the pudding is in the eating."

During a “Save America” rally in Greenwood, Nebraska in May, 45th President Donald J. Trump called on Joe Biden to take a cognitive test and urged the career politician to “release the results for the world to see”, as previously reported by The Freedom Times.

Trump in 2018, received a perfect score when he had asked to take a mental test. He was given the Montreal Cognitive Assessment as part of a medical exam by Dr. Ronny Jackson, the White House physician, who said he had absolutely no concerns about Trump’s neurological function. Trump scored 30 out of 30.

President Trump calls on Joe Biden to take a cognitive test "once and for all" and "release the results for the world to see" pic.twitter.com/FXHaFxDyJe