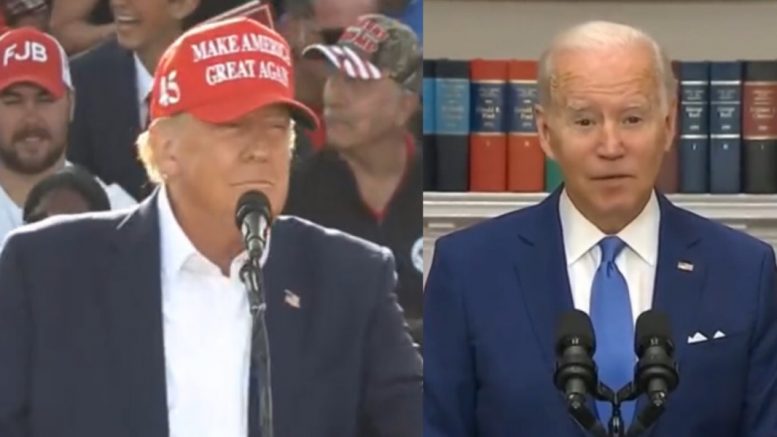 During a “Save America” rally in Greenwood, Nebraska on Sunday, 45th President Donald J. Trump called on 79-year-old Joe Biden to take a cognitive test and urged the Democrat career politician to “release the results for the world to see.”

A video clip was played on the jumbo screen during the rally showing Biden repeatedly having a hard time pronouncing the word “kleptocracy” during a speech last week as he was asking Congress for an additional $33 billion Ukraine aid package.

“Just look at the video of Joe Biden attempting to speak last week very tough to Russia and Putin. Take a look at this,” President Trump said before playing a clip of Joe Biden’s remarks.

“And it got worse, but we don’t have all afternoon,” he said, referring to Biden.

“Once and for all, Joe Biden should put the question to rest by taking a cognitive test. You have to do it and release the results for the entire world to see,” the 45th President urged.

Trump in 2018, received a perfect score when he had asked to take a mental test. He was given the Montreal Cognitive Assessment as part of a medical exam by Dr. Ronny Jackson, the White House physician, who said he had absolutely no concerns about Trump’s neurological function. Trump scored 30 out of 30. Video Below

President Trump calls on Biden to take a cognitive test:

President Trump calls on Joe Biden to take a cognitive test "once and for all" and "release the results for the world to see" pic.twitter.com/FXHaFxDyJe

“We’re going to seize their yachts, their luxury homes, and other ill-begotten gains of Putin’s kleptoc- — yeah — kleptocracy and klep- — the guys who are the kleptocracies,” Biden told reporters.

Moments earlier, Biden also mistakenly said that the US will “accommodate” the Russian oligarchs “and make sure we take their — take their ill-begotten gains.” In the official transcript of Biden’s remarks that was later posted on the White House website, the word “accommodate” was stricken out to indicate that Biden actually meant to say “hold accountable”, New York Post reported.

Gen. Flynn Releases a Statement on the Unfolding Situation in Ukraine: “This ‘Invasion’ was Totally Avoidable”

FLASHBACK: Biden Revealed During 2020 Debate, ‘I Would Transition From the Oil Industry, Yes’

Rep. Buck Issues A Message To Biden & Beto, Daring Them To Take Away His AR-15 Out Of His Office