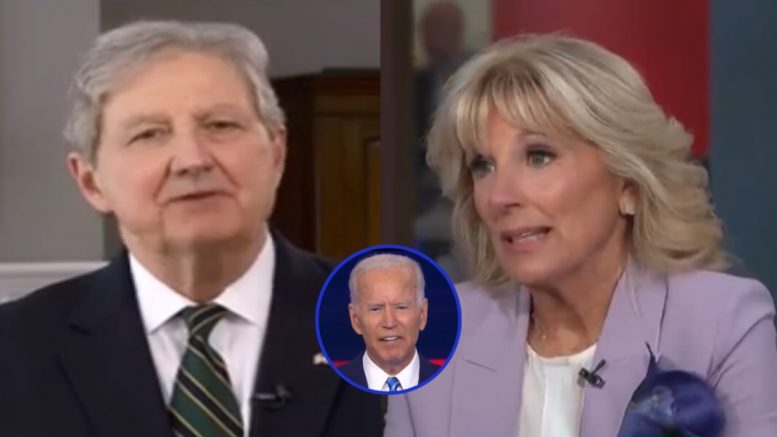 Senator John Kennedy (R-LA) reacted Monday to remarks made by Jill Biden over the weekend when she defended her husband’s stalled agenda during a private Democratic National Committee fundraiser.

“[The President] had so many hopes and plans for things he wanted to do, but every time you turned around, he had to address the problems of the moment,” said Biden, speaking to about two dozen attendees at a private home on the popular vacation island off the coast of Massachusetts, CNN reported.

“He’s just had so many things thrown his way,” Jill Biden also said at the event. “Who would have ever thought about what happened [with the Supreme Court overturning] Roe v Wade? Well, maybe we saw it coming, but still we didn’t believe it. The gun violence in this country is absolutely appalling. We didn’t see the war in Ukraine coming.”

Responding to Biden’s comments, Senator John Kennedy suggested Joe Biden’s “woke” policies are the cause of his own disapproval among Americans and quipped that he was “sorry” that the first lady “is not enjoying herself more”.

“I’m sorry the first lady is not enjoying herself more. Imagine how the American people feel,” the Louisiana Senator said during an interview on Fox News. “They don’t get free food and free housing or a free helicopter, or a free plane, or several free cars and staff of thousands.”

“Here is cold dish of truth: you reap what you sow. Go woke and go broke. And that’s the reason the results of President Biden’s policies. … Biden has chosen to blindly follow such masters of the universe such as Senator Bernie Sanders, congresswoman [Alexandria] Ocasio-Cortez, and the people on The View”, Senator Kennedy said sarcastically.

Asked why Joe Biden is incapable of solving problems when faced with crises, Senator Kennedy replied, “I don’t know. Some think that age is not a guarantee of wisdom. That may be part of it, but I think the real reason is his policies.”

Also asked about most Democrats not wanting Joe Biden to run in 2024 according to a poll, Kennedy said, “I realize the first lady is not having a good time, but imagine how the president feels.”

“He is less than half way through his term and he’s already a lame duck. The majority of Americans think he shouldn’t run for reelection. The majority of Democrats think he shouldn’t run for reelection. A lot of his colleagues are already talking about running against him. And the only way he’s going to find his footing, in my judgement, and the only way the American people are going to be better off, is to reverse his woke policies. It’s just that simple. You reap what you sow,” he added.

Related: Sen. Kennedy: ‘The Creepy Banjo Kid in Deliverance is More Popular Than the President’